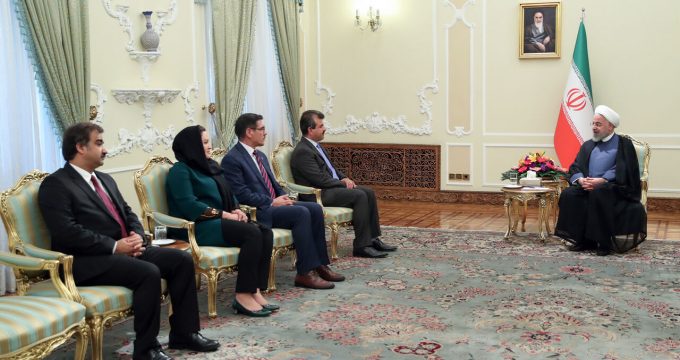 In a meeting to receive credentials of new Afghan Ambassador Abdolghafour Lival on Sunday, President Rouhani went on to say that Iran and Afghanistan had enjoyed many historical and cultural commonalities and lived together for centuries.

After receiving the credentials of the new ambassador to the Islamic Republic of Afghanistan, President Rouhani said the US military presence in Afghanistan has not and will not benefit the security of this country and the people of Afghanistan, but they pursue their goals of creating insecurity in the region.

Form the Islamic Republic of Iran’s point of view, the presence of foreign troops in any of the countries in the region is problematic, and Iran is confident that the US military presence in Afghanistan would not benefit the security of this country and the people of Afghanistan, but they pursue their goals of creating insecurity in the region, the high-ranking official highlighted

He further stated that the Islamic Republic of Iran had always been with the Afghan people during the hard days, adding that Iran has provided services to the oppressed and dear people of Afghanistan, like own people, and a large number of Afghan children were studying in Iranian schools and universities.

Referring to Tehran’s readiness for consolidation of peace and sustainable security in Afghanistan, President Rouhani underscored that sustainable security, in addition to encouraging Afghan immigrants to return to their home countries, enhances trade and investment relations between the two countries, and Tehran hoped that the political, economic and cultural ties between Tehran and Kabul is more developed and the borders of the two countries to enjoy more security.

Rouhani described the unity of different ethnic and religious groups in Afghanistan as important and made the remark that Shias and Sunnis and different religions should know that they were members of a large family called Afghanistan and that everyone should strive for unity and consolidation of their country.

The new ambassador of the Islamic Republic of Afghanistan, Abdolghafor Lival, also expressed congratulation on the occasion of Eid al-Ghadir on his visit and also appreciated Iran’s support to the Afghan government and nation and reiterated that Afghan immigrants to Iran are larger than the population of some countries, and the Afghan nation and government had always been grateful for the hospitality of good people of Iran.