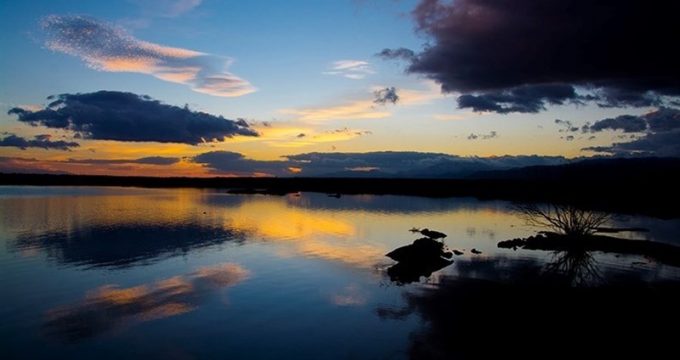 Tehran Times  – Although rains have drenched Hamoun wetland after two decades of dryness, it is getting dried again due to high evaporation, hence a comprehensive plan for restoration of the wetland has been prepared, ISNA reported on Tuesday.

The Hamouns are transboundary wetlands on the Iran-Afghan border made up of three lakes: Hamoun-e Helmand, which is entirely in Iran, Hamoun-e Sabari on the border, and Hamoun-e Puzak, almost entirely inside Afghanistan. The three lakes are linked and fed by water from the Helmand River which starts in the Hindu Kush Mountains in Afghanistan.

In the last two decades, once fertile wetlands have drastically dried up. The Taliban government closed the sluices to the Kajaki dam on the Helmand until 2002, which aggravated the impact of the worst drought the region has experienced in many decades, brought about partially by climate change and warming temperatures.

Referring to the establishment of the national headquarters of wetlands, he said that “the water right of the wetlands will be determined and pursued.”

He went on to say that 95 percent of the water flow into Hamoun wetland should be granted by Afghanistan. Despite agreement between Iran and Afghanistan, which has specified that 820 million cubic meters of water should be provided to Iran each year, there are still controversy on floods in the region.

There must be comprehensive plans along with serious enforcement to revive the wetlands, otherwise, no wetland will survive being affected by climate change as well as mismanagement

In return, Iran agreed to allow the ports of Bandar Abbas and Chabahar to be available to Afghanistan without preconditions. However, this agreement was neither ratified nor fully implemented due to the political developments in both countries.

Baqerzadeh Karimi also highlighted that to resolve the issue, a special working group has been set up to review Hamoun’s condition and prepare a joint comprehensive plan to revive the wetland.

Under the current circumstances, Hamoun’s water right has been determined by the DOE to be effective in negotiations, he added.

Wells around the Hamoun wetland is an issue which should be restricted by the Ministry of Energy, he said, adding, unfortunately, the amount of water released to Iran reaches a very small part of the wetland, which needs to be soon investigated.

Jazmourian wetland to be revived

Elsewhere in his remarks, Baqerzadeh Karimi noted that a restoration plan for Jazmourian wetland is also being prepared; as the amount of water needed to revive it has been determined.

Unfortunately, Jazmourian wetland has become a source of sand and dust storm due to water scarcity, he lamented, concluding that in the past, Jazmourian has been filled by the floods, which has been stopped due to some problems in recent years.

Nestled between the provinces of Kerman and Sistan-Baluchestan, Jazmourian is one of the two major wetlands in southeast Iran, which is on the knife-edge of complete desiccation as a result of climate change, excessive dam construction and the depletion of groundwater resources.

The excessive withdrawal of groundwater resources and permanent drought over the past years along with low precipitation and high temperature rates, have led the wetland to dry up.

Precipitation brought back many wetlands to life

Based on the latest data published by National Drought Warning and Monitoring Center affiliated to Meteorological Organization since the start of the current water year (September 23, 2018) the whole country received 314.5 millimeters of rain.

Torrential rain has brought back many wetlands back to life across the country, for one, over 18,000 hectares of the Hamoun wetland have been drenched.
Jazmourian wetland also filled with water by 30 percent.

The province of Sistan-Baluchestan also received 128.9 millimeters of rain in the same period which indicates 330.2 percent rise compared to last water year and 11.6 percent increase compared to the long-term averages.

However, the rainfall fluctuations are not permanent and after hot seasons and scorching temperatures, the wetlands face high evaporation again and go dry soon.
Therefore, there must be comprehensive plans along with serious enforcement to revive the wetlands, otherwise, no wetland will survive being affected by climate change as well as mismanagement.

Environment, Hamoun wetland August 16, 2019
Mianeh-Tabriz railway to be inaugurated within next two months
Substantial rise in permits issued for building homes in Iran