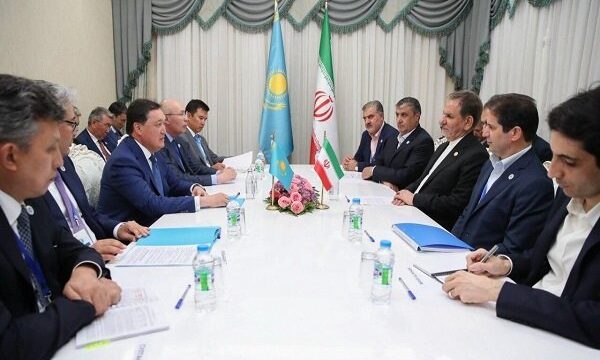 MNA – All potentials of Caspian Sea littoral states should be used to benefit all nations of the region, according to the Iranian First Vice-President Es’hagh Jahangiri on Monday.

Iranian First Vice-President Es’hagh Jahangiri made the remarks in a meeting with the Prime Minister of Kazakhstan Askar Mamin on the sidelines of the first Caspian Economic Forum underway in Turkmenistan’s Awaza on Monday.

Jahangiri described the First Caspian Economic Forum in Awaza as beneficial for both peace and security in the region and strengthening ties among member countries.

The vice president congratulated the recent successful presidential election in Kazakhstan, expressing hope that bilateral relation between Tehran and Nur-Sultan would further expand during the new period.

He also pointed to the signing of 110 documents on cooperation between the two countries over the last three decades and the holding of a joint commission in the near future, calling for intensifying efforts to remove existing obstacles on the way of bilateral relations.

He added Iran was ready to develop banking, commercial and tourism cooperation with Kazakhstan.

Jahangiri further expressed appreciation to Kazakhstan for hosting trilateral talks on Syria known as Astana Format, saying “your country has played a good role in strengthening solidarity in the Muslim world in the past, and I hope it will go on with its initiatives.”

Askar Mamin, for his part, emphasized the region’s economic development as one of the objectives of first Caspian Economic Forum and declared his country’s all-out readiness to boost regional and bilateral relations.

The prime minister added “joint plans and appropriate solutions can accelerate the development of bilateral relations and we hope to achieve that goal in the meeting of the Joint Commission which is going to be held in the near future.”

Askar Mamin further said that he personally will look for ways to resolve trade barriers between the two countries, adding, “we appreciate Iran’s support for our country’s positions during Astana meetings and initiatives presented in the field of the Islamic world.”