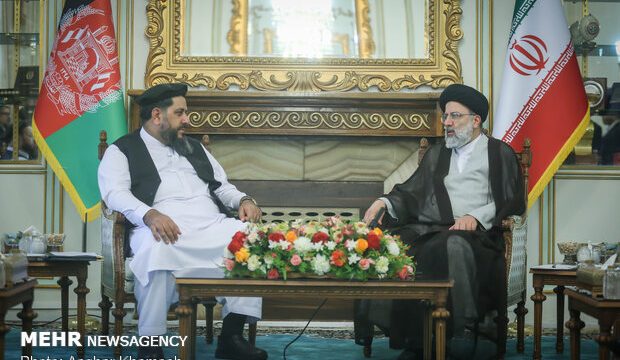 MNA – Iranian Judiciary Chief Seyyed Ebrahim Raeisi held a meeting with the Chairman of the Afghan Senate House, Upper House of the Parliament, Fazal Hadi Muslimyar in Tehran on Sunday.

In the meeting, the head of Iran’s Judiciary Chief Seyyed Ebrahim Raeisi described the visit of the Afghan delegation headed by Fazal Hadi Muslimyar to Iran as a visit to their ‘second home’, underlining that the exchange of visits and delegations play an effective role in consolidating bilateral relations between the two countries.

Raeisi stressed the need for continuation of cooperation and unity between the two countries as a critical and strategic necessity.

Elsewhere, the Iranian Judiciary head referred to 1,000 km shared borders between the two nations, adding the 2 million Afghan refugees see Iran as their second home, while wishing Afghanistan would be better off so that the Afghan refugees can return to their homeland one day.

The head of Iran’s Judiciary further emphasized the necessity of expanding cooperation in various legal and judicial fields between Iran and Afghanistan saying that Iran is ready to extradite convicts to Afghanistan to serve the rest of their jail terms in their country when the necessary ground is prepared.

Raeisi further said that Iran’s judicial system treats all equally and does not differentiate between Iranian and foreign nationals in the proceedings and in its legal procedures.

He also extended appreciation to Afghan government for its support for Iran in Human Rights summit, refuting western countries’ talk of human rights.

Fazal Hadi Muslimyar, for his part, extended his gratitude for the support and help of the Iranian government and nation to Afghanistan, calling for further expansion of bilateral relations.

Chairman of the Afghan Senate House also hailed the Leader of the Islamic Revolution of Iran for ordering the Iranian authorities to provide education to Afghan children residing in Iran.

The Afghan official further called on the Iranian Judiciary chief to take necessary steps for the extradition of illegible Afghan convicts to their country based on the legal agreements between the two countries.