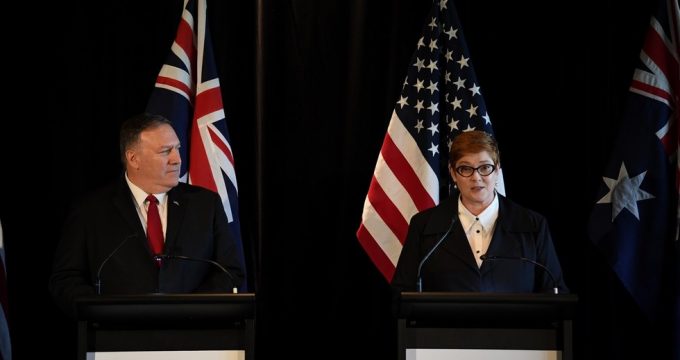 Russia Today – The US is seeking to pull Australia into its escalating row with Tehran, with Secretary of State Mike Pompeo requesting Canberra’s help to secure shipping routes against “unprovoked attacks” in the Strait of Hormuz.

The US hopes Australia “will partner” with Washington and “confront the Islamic Republic of Iran’s unprovoked attacks on international shipping in the Strait of Hormuz,” Pompeo told reporters after the talks.

Minister Reynolds confirmed that the US is seeking Australian help in dealing with Tehran but “no decision has been made” so far.

The request the US has made is a serious and complex one, that’s why we’re giving this request serious consideration.

“We will ultimately as we always do, decide what’s in our sovereign interests,” Reynolds said.

The US has been trying to assemble an international naval mission to patrol the Strait of Hormuz and the Persian Gulf after several incidents, involving Iranian forces and foreign oil tankers, occurred in the waterways.

In late July, Washington formally invited Germany to join the mission in order to help secure maritime traffic and “combat Iranian aggression” in the region. Foreign Minister Heiko Maas declined the request, saying that Berlin wanted to “avoid further escalation in the Strait of Hormuz.”

Britain, whose tanker ‘Stena Impero’ was seized by Iran last month, also proposed dispatching an EU-led squadron to the Strait of Hormuz. Germany and several other European nations indicated that they are willing to consider this idea.

Iran maintains that the British tanker was boarded after it had violated maritime rules as it was crossing the Strait of Hormuz.