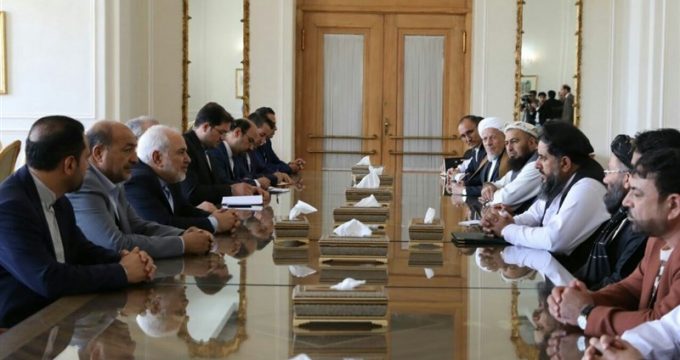 Tasnim – A ranking Afghan parliamentary delegation met with the foreign minister of Iran here on Sunday.

Led by Speaker of the House of Elders of Afghanistan (aka Mesherano Jirga) Fazal Hadi Muslimyar, the visiting Afghan delegation has visited Tehran within the framework of parliamentary cooperation between the two Muslim neighbors.

The Afghan parliamentary team held the meeting with Mohammad Javad Zarif at the Foreign Ministry on Sunday.

In the meeting, the two sides highlighted the cultural, historical and religious values that the two neighbors have in common, and discussed a range of issues from the bilateral relations to the latest developments in Afghanistan.

In June, Iran and Afghanistan signed a memorandum of understanding (MoU) to promote cooperation in the nuclear energy industry.

According to the agreement, Tehran and Kabul will work together in diverse areas of the nuclear industry, such as providing capacities for the manpower and employing nuclear energy in the health sector and agriculture.