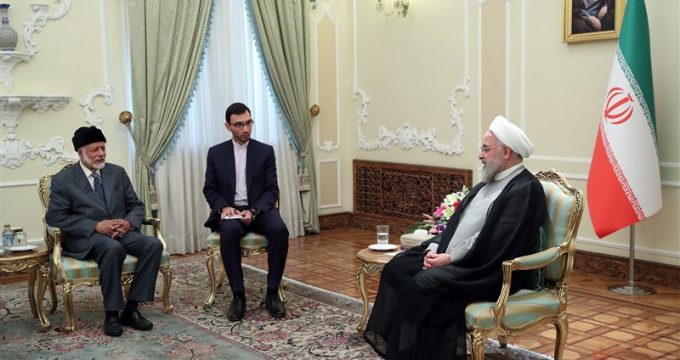 Tasnim – Iranian President Hassan Rouhani warned the UK government that it will definitely pay the price for the illegal seizure of an Iranian oil tanker in international waters off the coast of Gibraltar.

In a Sunday meeting with the foreign minister of Oman in Tehran, Rouhani denounced the “illegal” move by the British government to seize Iranian oil tanker Grace 1 in Gibraltar’s waters.

The seizure of Iran’s oil tanker has not given the UK any benefit and will definitely be to its detriment, the president warned.

“The Islamic Republic of Iran will continue to stand vigorously against any violation of regulations that would threaten the security of shipping in the Persian Gulf, Strait of Hormuz, and Sea of Oman,” Rouhani underlined.

The main responsibility to ensure security of the Strait of Hormuz lies with Iran and Oman, the president said, adding, “The Islamic Republic of Iran always tries to make the Sea of Oman, Persian Gulf, and Strait of Hormuz a safe and reliable route for free international navigation.”

Presence of foreign forces in the region not only does not contribute to security, but is the root cause of regional tensions, he deplored.

The president also voiced Iran’s willingness to enhance cooperation with Oman in various fields, saying Tehran and Muscat can broaden ties in diverse areas such as the energy industry and bilateral trade.

For his part, Omani Foreign Minister Yusuf bin Alawi bin Abdullah hailed the brotherly and friendly ties between his country and Iran, saying the sultanate welcomes closer interaction with the Islamic Republic.

The region is riding out of fabricated and proxy crises, the Omani minister said, stressing that sustainable and genuine security in the region would be impossible without Iran.