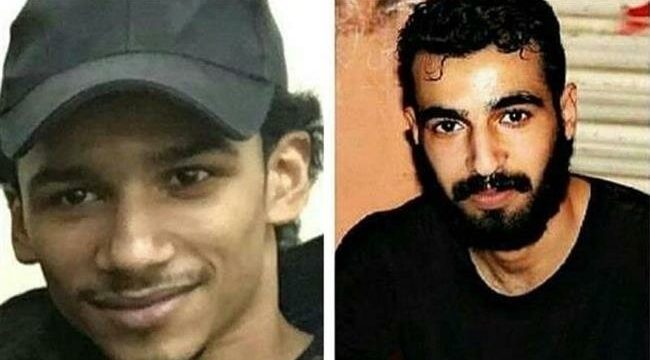 Ahmad al-Mullali, 24, and Ali Hakim al-Arab, 25, were executed at Jaw prison, south of the Bahraini capital Manama, on Friday after private meetings with their families.

Al-Malali and al-Arab were sentenced to death last year in a mass trial along with another 56 men who were convicted and given jail terms on “terrorism crimes”.

The Public prosecutor’s office announced the men were put to death on charges of possessing firearms and killing a police officer. The opposition al-Wefaq society condemned the executions as extrajudicial.

The Bahrain Centre for Human Rights said that the families of the two had received phone calls from Jaw prison for private visits – a procedure that usually precedes execution.

Reports had also been emerged of an increased security presence around the jail.

Bahraini law requires death row inmates to receive a family visit on the same day that they are killed.

Mullali and Arab were arrested separately in February 2017.

They were convicted of “terrorism offenses” and sentenced them to death in January 2018 during a mass trial marred by allegations of torture and serious due process violations.

The Bahraini Court of Cassation upheld the death penalties against the two men in May 2019.

A London-based Bahraini activist rights group, the Bahrain Institute for Rights and Democracy (BIRD), said “the executions mark one of Bahrain’s darkest days”.

“”It appears that the Bahraini regime planned this meticulously, timing the executions to coincide with US, EU and UK legislative recesses in order to avoid international scrutiny,” BIRD’s Director Sayed Ahmed Alwadaei said in a statement.

Human Rights Watch (HRW) had called on the Bahraini king to immediately revoke the executions and spare the two young men from “such a cruel death.”

“If the executions are indeed imminent, then the king has committed a grave injustice by ratifying the death sentences of the two men despite the allegations of torture and other serious due process concerns,” said Lama Fakih, acting Middle East director at HRW. “He should right the wrong by immediately revoking the death sentences.”

Additionally, Amnesty International said that al-Malali and al-Arab had been tortured in custody through electric shocks and beatings.

“If the Bahraini authorities go through with these executions it would be an utterly shameful show of contempt for human rights. The death penalty is an abhorrent assault on the right to life and the utmost cruel, inhuman and degrading punishment. Its use is appalling in all circumstances, but it is all the more shocking when it is imposed after an unfair trial in which the defendants were tortured to confess,” had said Lynn Maalouf, Middle East research director at Amnesty International.

“Bahrain’s authorities must immediately halt all plans to carry out these executions. These two men could be dead within 24 hours. Bahrain’s international allies, primarily the USA and the UK, must speak out today and make a strong call on the Bahraini authorities to stop these imminent executions and end their use of the death penalty,” she had added.

Moreover, Agnes Callamard, the UN special rapporteur on extrajudicial, summary, or arbitrary executions, had issued a last-minute appeal to stop the imminent execution of the two Bahraini inmates.

“The authorities in Bahrain must immediately halt any plans to execute these men, annul the death sentences against them and ensure they are retried in accordance with international law and standards,” she said.

Since February 2011, Bahraini people have been holding peaceful protest rallies regularly, demanding that the Al Khalifah family relinquish power and let a just system representing all citizens be established.

They have also been complaining about widespread discrimination against the country’s Shia majority.

Manama has responded to the demonstrations with an iron fist. The authorities have detained rights campaigners, broken up major opposition political parties, revoked the nationality of several pro-democracy activists and deported those left stateless.

in March, 2011, troops from Saudi Arabia and the United Arab Emirates were deployed to assist Bahrain in its crackdown.