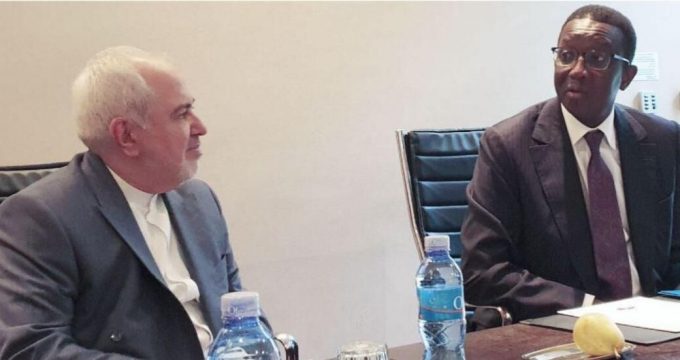 Tasnim – Iranian Foreign Minister Mohammad Javad Zarif, who is on an official visit to Senegal, held talks with his counterpart in the West African country on a range of issues, including ways to boost bilateral relations between the two nations.

In the meeting, held in the Senegalese capital of Dakar on Thursday, Zarif and Amadou Ba exchanged views about grounds of cooperation between Iran and Senegal in the fields such as trade, energy, automotive industry, nanotechnology, etc.

The necessity for a joint economic commission between the two countries and mutual cooperation in international circles, especially in the United Nations and the Non-Aligned Movement, were also discussed in the meeting.

They also discussed the need for unity of the Islamic world and supporting Palestine and the rights of its people, as well as the need for stability and security in the region and reduction of tensions.

Heading a high-ranking delegation, Zarif arrived in Dakar on Thursday morning to hold talks with senior officials of the West African country.

During his one-day trip, Zarif also plans to hold talks with the president and parliament speaker of Senegal on a range of issues, including bilateral relations.

After taking part in an annual meeting of the UN Economic and Social Council (ECOSOC) in New York, Zarif visited the Venezuelan capital of Caracas to attend Non-Aligned Movement (NAM) foreign ministers’ meeting.

The Iranian top diplomat then visited Nicaragua on the second leg of his tour of Latin America.

Zarif traveled to Bolivia on the last leg of his tour of Latin American nations and held talks with senior officials of the country on issues of mutual interest.