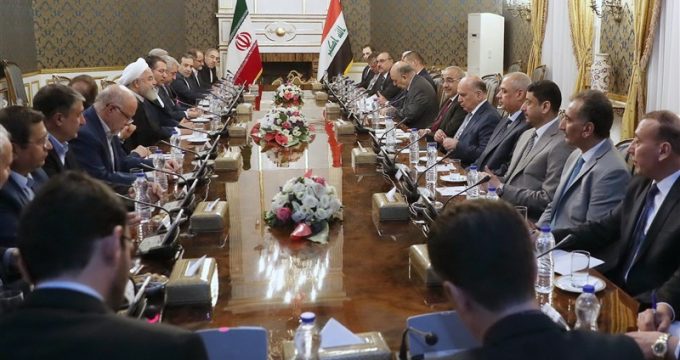 Tasnim – President of Iran Hassan Rouhani called for the enhancement of relations with Iraq, saying closer ties between the two neighbors would contribute to regional security and stability.

In comments at a meeting of high-ranking delegations of Iran and Iraq, held in Tehran on Monday evening, Rouhani highlighted the effectiveness of meetings and reciprocal visits by the two countries’ officials, saying, “Fortunately in recent years, effective steps have been taken for deepening Tehran-Baghdad relations, and this trend will continue.”

“Today, the friendly relations between Tehran and Baghdad are at a level that the presence of Iranian and Iraqi representatives ensures mutual interests of both countries,” the president’s official website quoted him as saying.

“Iran has been, and will be, the main guardian of security and freedom of navigation in the Persian Gulf, the Strait of Hormuz and the Sea of Oman,” he said, stressing that the Islamic Republic is not willing to escalate tensions in the region and with other countries, and will never initiate war and tension.

He also emphasized, “We believe that the issues of the region should be resolved through dialogue, negotiation and cooperation between neighbors and regional countries.

“Iran and Iraq can promote their cooperation in the development of regional stability and security, as two friendly and neighboring countries.”

Referring to Iran-Iraq agreements on dredging the Arvand River, the president said accelerating the implementation of these agreements is in the interest of the two nations.

“The development of Iran-Iraq banking cooperation is important in expanding the commercial and economic relations between the two countries,” he added.

Referring to the two countries’ agreement on facilitating the issuance of visas and the development of bilateral relations, Rouhani said, “I appreciate the Iraqi government for considering special facilities for the travel of Arbaeen pilgrims to Iraq.”

For his part, Prime Minister of Iraq Adil Abdul Mahdi, who was heading the senior political and economic delegation of Iraq, praised Iran’s hospitality, saying, “The feeling of friendship and brotherhood of Iran and Iraq towards each other is mutual.”

He also stated that the recent visit of the Iranian president to Iraq was a historic one and milestone in the relations between Tehran and Baghdad, saying, “The officials of the two countries are serious in implementing the agreements made in that visit.”

Referring to the importance of developing relations and cooperation between Iran and Iraq in different sectors, Abdul Mahdi said, “We need to work hard to secure and protect the interests of the two nations by expanding our relations.”

Denouncing conspiracies for escalating tensions in the region, the Iraqi Prime Minister said, “Iraq has never been, and will not be, part of the sanctions against Iran.”

He also stressed the development of cooperation between the two countries in various sectors. “We will do our best to develop economic cooperation with Iran,” he said.