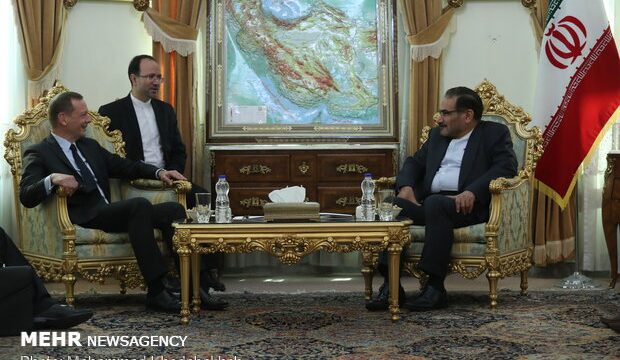 MNA – Secretary of Iran’s Supreme National Security Council, Ali Shamkhani said that gradual reduction of commitments to the nuclear deal is an unchangeable strategy of Iran.

He made the remarks Wednesday in a meeting with French President Emmanuel Macron’s top diplomatic adviser Emmanuel Bonne in Tehran.

Criticizing the inaction of European countries to stand against US constructive policies, Shamkhani said, “given Europe’s failure to use the one-year-long opportunity, during which Iran unilaterally implemented its commitments, [now] the country’s firm decision is to comply with commitments in proportion to other parties’ measures. The period of unilateral implementation of commitments has ended.”

Introducing gradual cuts on JCPOA is an ‘unchangeable strategy of Iran’, he said, noting that this measure will continue, according to paragraphs 26 and 36 of the deal, as far as Iran’s legal demands are met.

“Today, America is holding EU’s independence hostage. European countries require to stand against US unilateralism in a bid to defend their identity and independence,” said the Iranian official.

For his part, Emmanuel Bonne, highlighted in the meeting that he has not come to Iran as a mediator and carries not message from Washington.

He said that President Macron is after finding a joint initiative on stopping US economic war against Iran and believes that this ceasefire would help to de-escalate tensions in the region.

Bonne went on to say that Iran plays an indisputable role in the Middle East and that Paris is keen on continuing talks with Iran on managing regional crises, such as in Syria, Yemen, Iraq and Lebanon.

European countries have established a financial mechanism dubbed INSTEX (Instrument in Support of Trade Exchanges) which they claim to be operational but its first transactions are yet to be completed. The mechanism aims to facilitate trade with Iran through bypassing US sanctions, however, it will just, at least for now, cover trades regarding food, medicine, and humanitarian aid. Iran says this is not enough and the mechanism should cover oil trades and banking relations as well.