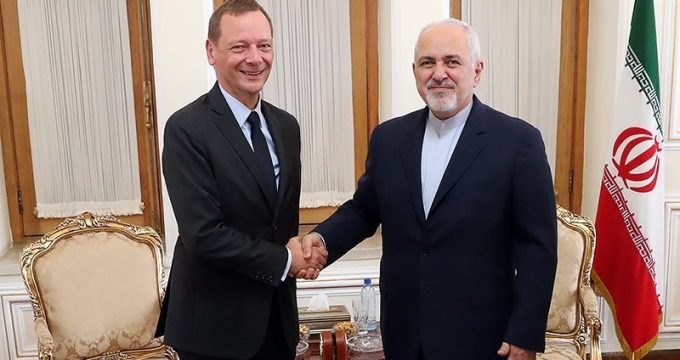 Tasnim – French President Emmanuel Macron’s top diplomatic adviser, who is on an official visit to Iran, held talks with Iranian Foreign Minister Mohammad Javad Zarif about a host of issues, including bilateral ties between Tehran and Paris.

During the meeting, held in Tehran on Wednesday, Zarif and Emmanuel Bonne exchanged views about various topics, including ways to boost relations between Iran and France and the latest regional and international developments.

According to the French presidency’s office, Bonne is in Tehran “to piece together a de-escalation” strategy after Iran threatened to restart deactivated centrifuges and raise the enrichment of uranium to above the limit set by the 2015 nuclear deal, known as the Joint Comprehensive Plan of Action (JCPOA).

Iran on Sunday declared the second step to reduce its commitments by ramping up the level of uranium enrichment to over 3.67 percent.

President Hassan Rouhani had warned on Wednesday that the second step of reduction in Iran’s commitments would take place on Sunday, saying, “On July 7, the level of (uranium) enrichment in Iran will not be 3.67 percent anymore, as we will abandon such a commitment and increase it (enrichment) to any amount that we need.”

Iran maintains that the new measures are not designed to harm the JCPOA, but to save the accord by creating a balance in the commitments.

However, the EU’s failure of ensure Iran’s economic interests forced Tehran to stop honoring certain commitments, including an unlimited rise in the stockpile of enriched uranium.