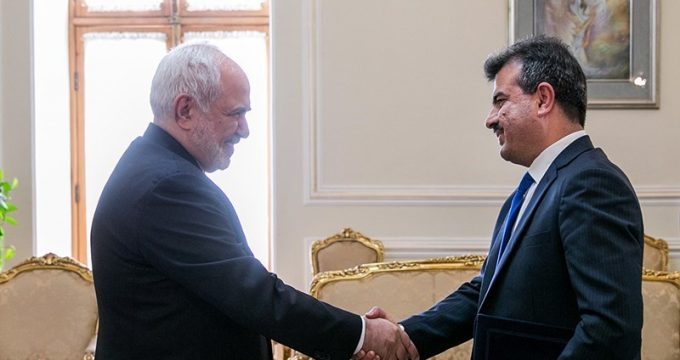 Tasnim – Foreign minister of Iran and Afghanistan’s ambassador to Tehran weighed plans to finalize a document on strategic relations between the two neighbors.

Afghanistan’s new ambassador to Iran, Abdul Ghafoor Liwal held a meeting with Iranian Foreign Minister Mohammad Javad Zarif in Tehran on Sunday to submit a copy of his credentials.

In the gathering, the two ranking diplomats highlighted the cultural, lingual and religious values that the two neighbors have in common.

Pointing to the centennial of establishment of political and diplomatic ties between Iran and Afghanistan, Zarif and Liwal also discussed the ways for an immediate finalization of a comprehensive document on strategic relations between the two neighbors.

The Iranian foreign minister and the incoming Afghan envoy also stressed the need for stability and security in Afghanistan.

Last month, Iran and Afghanistan signed a memorandum of understanding (MoU) to promote cooperation in the nuclear energy industry.

According to the agreement, Tehran and Kabul will work together in diverse areas of the nuclear industry, such as providing capacities for the manpower and employing nuclear energy in the health sector and agriculture.