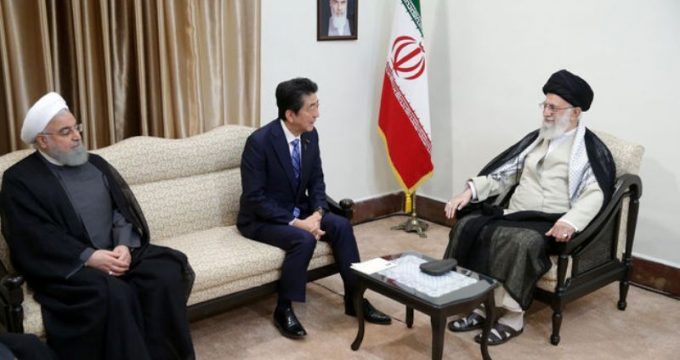 June 16, The Iran Project – Following US President Donald Trump’s trip to Japan, Japanese Prime Minister Shinzo Abe took a two-day trip to Iran for what was widely seen as an attempt to calm escalating US-Iran tensions. This was the first visit by an incumbent head of the Japanese government to Iran since 1979. But the premier’s efforts ended in flames due to suspected attacks on two tankers carrying petrochemicals, one of which was a Japanese-owned ship, in the Gulf of Oman.

Abe had sought to mediate talks between Iran and the United States after tensions have spiked since 8 May 2018, when the Trump administration unilaterally  withdrew from the Joint Comprehensive Plan of Action (JCPOA) — a nuclear deal between Iran, the European Union and the five permanent members of the United Nations Security Council plus Germany (P5+1) — and reimposed wide-ranging sanctions in a bid to bring the country’s oil exports to zero.

Before boarding his plane for Tehran, Abe told reporters that amid concerns over growing tension in the Middle East and with the attention of the international community on the issue, Japan wishes to do its best toward peace and stability in the region, while adding that, .’Based on traditional friendly ties between Japan and Iran, I would like to have candid exchanges of opinions” with the Iranian president and Ayatollah Khamenei, but he made no direct reference to mediation plans.

With the US increase of its military presence in the Middle East, Tehran-Washington row reached an alarming level, raising the fear of war and plunging the crisis-hit Middle East into the new chaos. The US has sent a carrier strike group, fighters, bombers, Patriot missile systems, an amphibious landing ship and 1,500 troops to the Mideast.

No Negotiation “Under Pressure”

Shinzo Abe traveled to Tehran specifically to deliver Trump’s message to Ayatollah Khamenei, to which the Iranian leader replied, “I have no doubt about your good intentions [and] what you quoted from the American president, but I do not see Trump’s character as worthy for exchanging messages and I have no answer for him and will never have one.”

“The Islamic Republic of Iran has no trust in America and will never repeat the bitter experience of previous negotiations with America in the framework of the JCPOA,” Ayatollah Seyyed Ali Khamenei said while noting that “No wise and proud nation will accept negotiations under pressure.”

He went on to add that the US has no “competency to say which country should or shouldn’t possess nuclear weapons,” given its own nuclear stockpile, which numbers in the thousands.

The former UK Ambassador to Syria Peter Ford reiterated that Abe’s visit to Tehran was doomed from the outset given the US offer he delivered was impossible for any reasonable government to accept.

The US military should be worried, Ford argued, because Iran has every right to strike back.

“Iran is being provoked beyond endurance by a reckless US policy of ‘maximum pressure’ which amounts to economic warfare,” Ford said. “How could the US aim at stopping all Iranian oil exports and not expect Iran to put into effect its warning that it could close the Gulf?”

Since entering the Oval Office in 2016, Trump — a self-professed negotiator — exited from several international agreements and organizations such as the Trans-Pacific Partnership, the Paris climate agreement, NAFTA, UNESCO and United Nations Human Rights Council as well as Iran nuclear deal.

On Thursday (June 13),  just as Japan’s prime minister was meeting Khamenei, two oil tankers carrying Japan-related cargo were hit in suspected attacks. While the US was quick to point the finger at Tehran, Iranian Foreign Minister Javad Zarif tweeted that the timing of the attack seemed intended to undermine the “extensive and friendly talks” held with Abe. He wrote the word “suspicious” didn’t even “begin to describe what…transpired.”

Besides,  Japanese officials have said Tokyo dismissed a claim by the United States that Iran attacked two oil tankers in the Sea of Oman. Japan’s Kyodo news agency cited informed state officials as saying Tokyo had demanded that Washington examine the case further, and that grainy video footage released by the US as supposed evidence was unclear and could not be used to prove anything.

In another policy shift, Trump said that he appreciated the recent visit by Abe to Iran to meet Supreme Leader Ayatollah Khamenei, but that he believed it is”too soon to even think about” the United States making a deal with Tehran. “They are not ready, and neither are we!” he wrote in a tweet.

US allies in Europe and Asia say they share Washington’s concerns about some Iranian behavior but believe exiting the agreement was a mistake, which undermines Iranian pragmatists, strengthens hardliners and makes further negotiations harder.