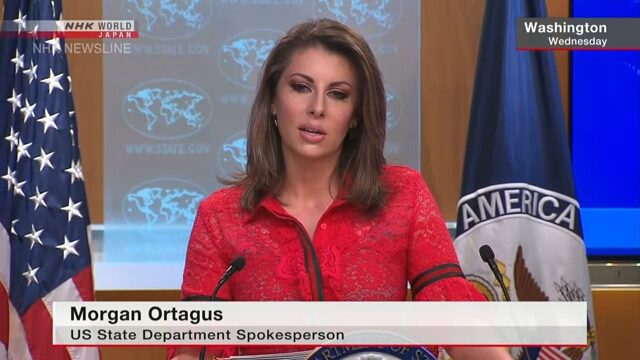 NHK – The US State Department has welcomed Japan’s Prime Minister Shinzo Abe’s visit to Iran in his effort to help ease tensions mounting between the country and the United States.

At a news conference on Wednesday, State Department Spokesperson Morgan Ortagus said the United States and its allies are in agreement that Iran’s “destabilizing and malign” activities must stop.

She said the State Department will support whatever the Japanese prime minister is able to do. She said the department believes that he will convey to Iran the message that any action taken by Iran to escalate tensions will not be tolerated.

At a news conference at the White House, President Donald Trump said Iran had been a “terror all over the world” when he became president.

He criticized the nuclear agreement between Iran and a group of world powers that the administration of his predecessor, Barak Obama, helped negotiate.

Trump said he does not want Iran to have problems and that he hopes the US will be able to “get along with” the Middle East country.

Analysts say the United States wants to ease the current tension with Iran with the help of Japan, which has favorable relations with that country.