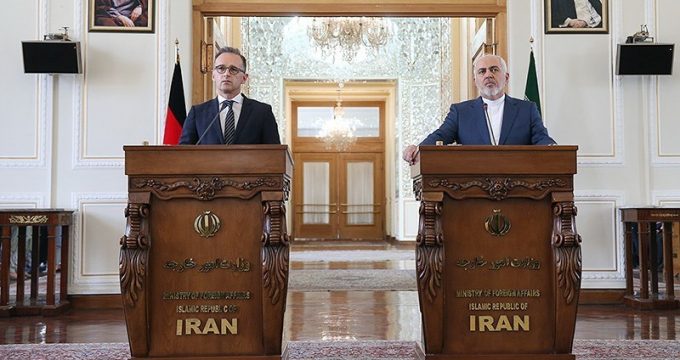 No measure against Iran to go unanswered: Zarif

Tasnim – Iranian Foreign Minister Mohammad Javad Zarif hit back at the Israeli prime minister over his warmongering remarks against the Islamic Republic, saying any measure against Iran would be followed by “a decisive response”.

Speaking to reporters at a joint press conference with his German counterpart, Heiko Maas, in Tehran on Monday, Zarif pointed to claims against Iran’s nuclear program and said, “You should ask a regime possessing nuclear weapons about how (Benjamin) Netanyahu stands next to the Dimona (reactor), a nuclear weapons site, and says Iran should be destroyed.”

Zarif was referring to Netanyahu’s remarks back in August 2018, when he used a visit to Dimona, a secretive Israeli atomic reactor, to warn Tehran that Tel Aviv has the means to destroy the Islamic Republic, in what appeared to be a veiled reference to its assumed nuclear arsenal.

“Of course, no one can act against our people without receiving a decisive response,” the Iranian top diplomat said.

Iran has never waged a war against any country and will not do so in future, Zarif said, adding that if any country starts a war on Iran, however, it would definitely not be the one that ends it.

Zarif further pointed to his earlier meeting with Mass, saying he had “good talks” with the German top diplomat about ways to reduce regional tensions.

Maas arrived in Tehran on Sunday night. His visit is part of a concerted European effort to preserve the 2015 nuclear deal between Tehran and world powers following the US withdrawal from the accord.

He is also scheduled to meet with Iranian President Hassan Rouhani.

Tensions between Washington and Tehran have been rising since US President Donald Trump withdrew the US from the nuclear deal, known as the Joint Comprehensive Plan of Action (JCPOA), and imposed unilateral economic sanctions against Iran, mainly targeting its energy dealings on the global market.