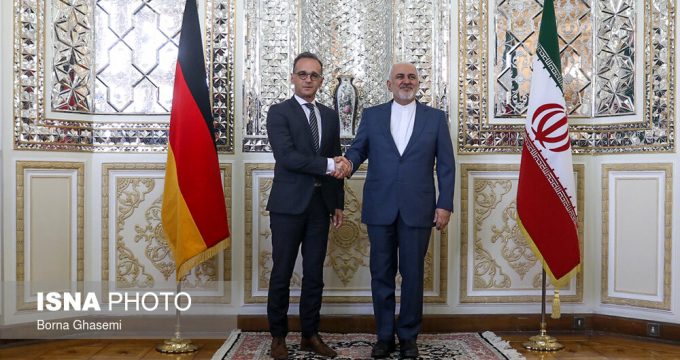 Press TV – German Foreign Minister Heiko Maas arrived in the Iranian capital on Sunday night in a trip which was expected to be focused on saving the Iran deal and easing the Iran-US tensions, but the European diplomat apparently seeks to use it for pressuring Tehran into giving up its missile defense program.

While in Tehran, earlier reports said, Maas was supposed to hold talks with President Hassan Rouhani and Foreign Minister Mohammad Javad Zarif on Monday, as part of “a concerted European effort to preserve the Iran nuclear pact with world powers and defuse rising US-Iranian tensions.”

Maas warned during a weekend stopover in Iraq en route to Tehran about the dangers of any conflict with Iran for the entire Middle East, and said the Europeans were convinced it was worth trying to keep the nuclear agreement with Iran.

Tensions have continued to rise in the Middle East after Washington left a 2015 multilateral nuclear deal between Iran and six world powers and reimposed unilateral sanctions against the Islamic Republic.

Washington further intensified tensions after it decided to build up its military presence in the Persian Gulf region, when it dispatched an aircraft carrier strike group, a bomber task force, and an amphibious assault ship to the Persian Gulf, citing an alleged Iranian threat.

Iran says it poses no threat to anyone but would defend itself against any aggression.

Zarif said on Sunday Maas’s trip will be focused on saving the Iran nuclear deal, and that his visit showed Germany was trying to “keep the (nuclear deal) alive”. But, suggesting Iran did not view Maas as a mediator with Washington, he added, “It is unlikely that the German foreign minister is travelling to Tehran to carry a special message.”

Maas coordinated his trip with France and Britain, and also discussed it with US Secretary of State Mike Pompeo.

European signatories of the 2015 nuclear deal, including Germany, claim they are trying to keep the accord alive by launching a long-awaited special trade vehicle called INSTEX (Instrument in Support of Trade Exchanges), which is aimed at helping Iran reap some benefits from the Joint Comprehensive Plan of Action (JCPOA).

However, Iran says the Europeans have not done enough to save the nuclear deal, and the US violation of the JCPOA has barred Tehran from benefiting from the economic dividends of the JCPOA.

Running out of patience with the EU’s inaction in the face of the growing US pressure, Iran reduced its commitments under the deal on May 8, and warned the EU that it would consider leaving the accord after 60 days if its demands were not met.

After scaling back some of its commitments, Iran warned that after the two-month period, it would resume refining uranium to a higher fissile degree than that permitted by the accord if Europe failed to shield its trade from US sanctions.

While pretending to be on Iran’s boat when it comes to the nuclear deal, Europeans support the US administration’s pressures on Iran over its legitimate defensive capabilities, including its missile program, as well as its regional influence.

In Abu Dhabi on Sunday, the German foreign minister said that, in his talks, he would stress his country’s concerns about Iran’s missile program and its activity in Syria and Yemen.

“However, we think that this should take place as part of a dialogue,” he said, adding he did not think a strategy of maximum pressure and threats was helpful.

He made the remarks during a joint press conference with his Emirati counterpart Shaikh Abdullah Bin Zayed Al Nahyan, who said countries of the region must also be part of the nuclear deal with Iran.

“Broader issues must also be included in the deal, such as the Iranian ballistic missiles, supporting terrorism and meddling in the internal affairs of other countries,” Shaikh Abdullah claimed.

The comments came a few days after French President Emmanuel Macron’s call for fresh negotiations to “extend the terms of the JCPOA” and discuss Tehran’s missile program.

In a Thursday meeting with Trump, Macron listed four common priorities of the US and France in addressing “Iranian behavior”: preventing Iran from getting a nuclear weapon, reducing Iran’s ballistic activity, containing Iran’s regional activity and establishing peace in the region.

Iran has always said its nuclear activity is peaceful and refuses to put its missile and military capabilities on the negotiating table, as the Trump administration has demanded.

“First of all, Iran’s missiles are for defense and we need them for deterrence. We use resources for military expenses far less than any country in the region and that’s why we have announced from the very beginning that our missiles are non-negotiable,” Zarif told Al Jazeera in a December interview.

This is while the International Atomic Energy Agency (IAEA) has verified that “Iran’s missile activities are for peaceful purposes,” the top Iranian diplomat pointed out.

“As the foreign minister, I can say that the issue of missiles has never been subject to negotiations between Iran and its [opposite negotiating] sides,” Zarif told Tasnim in December, adding, “Our defense doctrine is basically based on deterrence and defense, not offensive [purposes].”

As part of its efforts to boost the country’s defensive capabilities, Iran on Sunday unveiled a domestically-designed and -manufactured air defense system capable of simultaneously destroying six incoming hostile targets.

The system, dubbed Khordad 15, was inaugurated in the presence of Defense Minister Brigadier General Amir Hatami.

Speaking at the unveiling ceremony, Hatami said the system was capable of detecting fighter jets and combat drones from 150 kilometers away and of tracking them within a range of 120 kilometers.

The system, he added, can also detect stealth targets at a distance of 85 kilometers and engage and destroy them within a range of 45 kilometers.

He also said the Khordad 15 air defense system used Sayyad 3 missiles and was capable of simultaneously detecting, intercepting, and shooting down six targets, adding that it could be readied to engage hostile targets in less than five minutes.