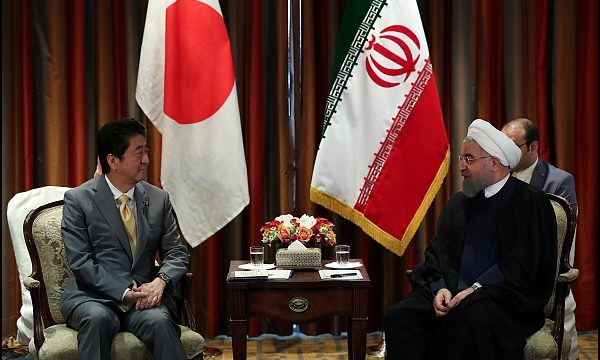 Lobe Log | Kaveh L. Afrasiabi: Japanese Prime Minister Shinzo Abe will visit Tehran next week to mediate between the United States and Iran, taking center stage in one of the most vexing global issues today threatening international peace and security. Although this is the first official Tehran visit by a Japanese prime minister since 1978, Abe is no stranger to Iran’s leaders and, in fact, has met Iran’s President Hassan Rouhani on several occasions on the sidelines of UN gatherings in New York. Prior to President Trump’s lavish Tokyo visit last month, Abe met Iran’s Foreign Minister Javad Zarif and then openly broached the idea of going to Iran. Trump subsequently embraced this idea, pointing to Abe’s relationship with Iran’s leaders and, simultaneously, dialing back his “regime change” objective and suggesting that the United States can find a modus vivendi with the “existing leaders.”

Since then, the Trump administration has offered to engage in direct talks with Iran “without preconditions,” a move rejected by Tehran as tactical “wordplay.” At the same time, both Rouhani and Zarif have mentioned U.S. “respect” for Iran as one of the principal preconditions for U.S.-Iran talks, thus leaving the door for diplomacy ajar. Zarif’s deputy, Abbas Araghchi, who has also served as Iran’s ambassador to Japan, has welcomed Abe’s intervention as potentially easing tensions in the region.

Abe is not the only political leader seeking to act as interlocutor between Tehran and Washington. Secretary of State MikePompeo has been in Bellinzona, Switzerland, which represents U.S. interests in Iran, reportedly to enlist his hosts for a “limited dialogue” with Iran.  But what can Abe and others possibly achieve when the Trump administration is hammering Iran with relentless economic warfare and Iran completely distrusts the current U.S. administration, particularly after it unilaterally exited the Iran nuclear deal? After all, Iran has signaled that no direct talks with the United States is possible unless Washington reverses itself on economic sanctions, which is highly unlikely if Trump can’t point to significant Iranian concessions to U.S. demands.

Abe’s advantage is that his government, while a key U.S. ally, has nonetheless shown vital signs of independence on various Middle East issues. For example, Japan distanced itself from the U.S. recognition of Israel’s annexation of the Golan Heights and refused to follow Washington’s lead when it relocated its embassy to Jerusalem. Equally important, Japan has sided with Europe in defense of the Iran nuclear deal.

From Tehran’s vantage point, Abe’s visit, in addition to conferring legitimacy on the Iranian government, can highlight U.S. diplomatic isolation on the nuclear issue, particularly in light of the repeated International Atomic Energy Agency confirmation that Iran has faithfully observed its obligations under the Joint Comprehensive Plan of Action (JCPOA). However, Abe’s intervention in this complicated diplomatic quagmire might backfire, fueling criticism at home that he has jeopardized U.S.-Japan relations at a time of rising tensions in in the Pacific and around the Korean Peninsula. This mission offers both opportunities and risks for Abe, who may wish to play a more prominent conflict-management role beyond Iran if successful in this Iran trip. Given Japan’s heavy reliance on Middle East oil—which accounts for 80 percent of Japan’s oil imports—Tokyo has a vested interest in Persian Gulf stability, which has been rocked by the recent escalation of tensions between Iran and the United States.

On the positive side, Abe’s Iran visit may create an off-ramp alternative for the current U.S.-Iran standoff through deft and imaginative diplomacy that elicits compromises from both sides. This would bode well for Iran-Japan economic relations as well, which surged in the post-JCPOA environment with an investment treaty in 2016 before experiencing a decline due to U.S. sanctions. That investment treaty, which laid the groundwork for possible Japanese investment in Iran’s energy and non-energy sectors, could be implemented given a breakthrough in the U.S.-Iran dispute.

Yet, on the negative side, Abe’s initiative could bolster Washington’s tactic of playing the peace card without relinquishing any essential element of its coercive diplomacy. Iran’s concern is that the Trump administration might be bluffing with its recent olive branches and could use a “failed” Abe’s mission to its advantage by painting Iran, reeling under U.S. sanctions, as rigid and inflexible. For some hardline Tehran politicians and pundits, such as the editors of the conservative daily Kayhan, the United States is on the war path with Iran, similar to the run-up to the Iraq War, and wants to claim that it exhausted all the diplomatic chances of  a peaceful resolution of tensions with Iran’s theocratic rulers.

Indeed, the Trump administration has shown no sign of stepping back from its strategy of maximum pressure, which has resulted in a substantial loss of Iran’s oil export market, much of which has been picked up by Saudi Arabia, which has increased production to stabilize the oil market. Unless Abe succeeds in convincing the Trump administration to ease U.S. sanctions—for instance, by renewing the oil exemptions for countries such as Japan, South Korea, and India—Tehran will not likely take Trump’s offer of dialogue seriously. Brian Hook, the State Department’s point man on Iran, has been sending contradictory signals on the issue of oil exemptions, which suggests that the administration is unclear about its next Iran steps.

If Washington is serious about giving Abe a chance with his Iran initiative, it must not only shift from sticks to carrots but move more fundamentally away from a confrontation strategy, centered on a regime change in Iran, to one of peaceful coexistence and détente. Iran has been offering a “non-aggression pact” to Saudi Arabia and other GCC (Gulf Cooperation Council) states, which could be extended as well to the American patron state of these oil sheikhdoms. An important prerequisite for such a paradigm shift is a more nuanced U.S. policy toward Saudi Arabia, which enjoys unprecedented Washington backing for an aggressive regional policy that has alienated some of its Arab neighbors, including Qatar. A more balanced U.S. Persian Gulf policy is a sine qua non for de-confliction and a return of stability to a volatile region on the precipice of yet another calamitous war. Abe’s intervention could prove pivotal in tilting the United States toward just such a balanced relationship with the Persian Gulf states including Iran.

Kaveh Afrasiabi has taught at Tehran University and Boston University and is a former consultant to the UN Program on Dialogue Among Civilizations. He is the author of several books on Iran, Islam, and the Middle East, including After Khomeini: New Directions in Iran’s Foreign Policy (Westview Books, 1995) and most recently Iran Nuclear Accord and the Remaking of the Middle East (2018). He is the co-author of the forthcoming Trump and Iran: Containment to Confrontation.