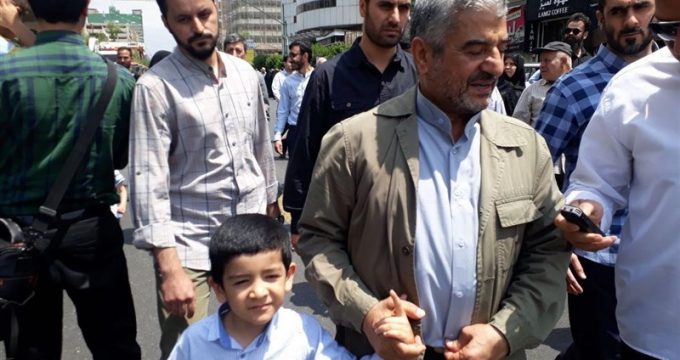 Speaking to reporters on the sidelines of a rally in Tehran on Friday to mark the international Quds Day, Major General Mohammad Ali Jafari, who is also the commander of Hazrat Baqiatollah al-Azam Cultural and Social Headquarters, hailed the Iranian people’s “glorious” presence in the nationwide rallies in support of Palestinians.

Certainly, the Islamic Republic’s policies in support of the oppressed people of Palestine will continue stronger than ever, he noted.

“In the next several years, we will witness the destruction of the Zionist regime,” the top commander went on to say.

The Iranian people took part in countrywide demonstrations on Friday to commemorate the International Quds Day, reaffirm support for Palestine, and condemn the Israeli crimes against Palestinians.

Quds Day demonstrations in Iran kicked off at 10 am local time in more than 950 cities across the country.

Millions of fasting people from different walks of life have poured into the streets in support of Palestinians, who have been suffering from Israel’s atrocities for decades.

Chanting slogans against the Tel Aviv regime and its allies, demonstrators called for an end to the Israeli occupation of Palestine, Judaization of the holy city of al-Quds and construction of Israeli settlements across the West Bank.

Carrying placards and chanting slogans against Israel and the US, the marchers also voiced strong opposition to the so-called deal of the century, a US-initiated plan for ensuring the interests of Israel.

Many Iranian officials and prominent figures have joined the demonstrations in various cities.