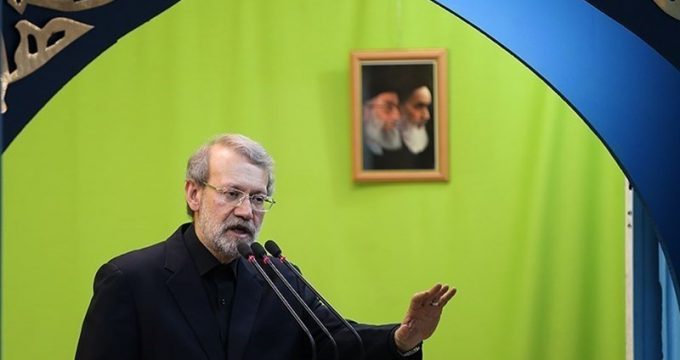 Tasnim – Iran’s Parliament Speaker Ali Larijani lambasted the US government for a total lack of dignity and morality in its policies, saying the use of the term ‘deal of century’ reveals the US businesslike attitude towards Palestine.

Addressing worshippers at the Friday prayers in Tehran, Larijani said the so-called deal of century indicates that the US conducts business in its foreign policies.

“The term ‘deal’ reveals that the US uses such a phrase and the word of ‘bargain’ when it comes to the dignity and religious honor of a community,” he deplored.

The Iranian speaker also denounced the absurdity of US political thoughts, saying, “The ideology on which the US civilization has been based is the philosophy of self-interest.”

In capital Tehran, the rallies are organized in ten different routes ending at the University of Tehran, where worshippers attended the Friday prayers.

This year’s Quds Day was marked against a backdrop of growing anti-US and anti-Israeli sentiments among Muslims, aggravated by the White House’s push to hammer out what it calls a peace deal between Palestine and Israel, known as the “deal of century”.

In comments at the Quds Day rallies in Tehran on Friday, President of Iran Hassan Rouhani stressed that the US-drafted deal of the century will end up as the ‘bankruptcy of the century’.

#FreePalestine, Ali Larijani, Deal of the Century, Quds Day, Tehran Friday prayers May 31, 2019
UN atomic agency: Iran in compliance with 2015 nuclear deal
In letter to heads of Islamic states, Rouhani warns against ‘Deal of the Century’