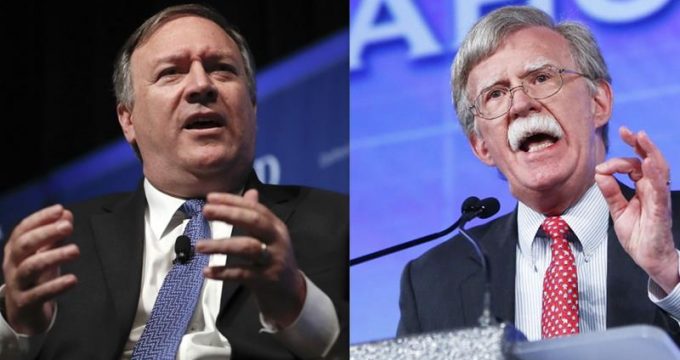 MNA – As national security adviser John Bolton and Secretary of State Mike Pompeo jockey for influence amid a variety of pressing international concerns, including Iran, North Korea and Venezuela, there is growing tension between the two men, four people familiar with the matter say.

That tension, sources say, doesn’t stem so much from policy differences as it does from clashes over their personal operating styles.

Multiple sources tell CNN that Bolton’s more calculating methods have rubbed Pompeo the wrong way and caused him to feel that Bolton is overstepping the role of national security adviser and infringing on his turf as the country’s top foreign policy official.

That has fueled a sense around the administration that, as one source puts it, “John Bolton is playing secretary of state,” and that he has taken too vocal a role, including on Twitter, on some of the most critical conflicts.

“There are disagreements and they’re noticed,” said the person. Other sources who have been in meetings with Bolton and Pompeo however say they have kept things cordial.

In the year or so that Pompeo and Bolton have been in their current jobs, they have been more or less aligned on policy. Both men consider themselves hawks on foreign affairs. Both favored tearing up the Iran nuclear deal and striking a harder line with Russia, China and even some of America’s allies. Though they did not have a close relationship before they came into the Trump administration, Bolton’s PAC did endorse and contribute to Pompeo’s 2014 congressional race so there was a familiarity between the two.

Still, Pompeo and Bolton have diverged dramatically when it comes to how they operate, fueling a growing animosity between the two men, sources say.