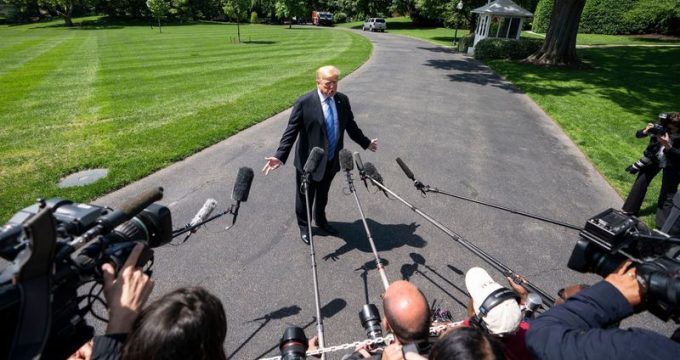 Los Angeles Times | AARON DAVID MILLER AND RICHARD SOKOLSKY: In the last two weeks, the odds of a military conflict between the U.S. and Iran have increased appreciably. The Trump administration has dispatched additional forces to the region and ramped up its threatening rhetoric in response to intelligence reports that Iran may be preparing to attack U.S. interests. Last week, the White House reviewed plans for sending up to 120,000 forces to the Middle East in the event Iran attacked U.S. interests.

The smart money is still betting against a sustained shooting war, a prediction we hope will come to pass. Thankfully, there are signs that the president is annoyed with his secretary of State and national security advisor for getting way ahead of him in planning a military conflict with Iran.

A compelling case could be made for the use of U.S. military force if Iran posed an immediate threat to vital American interests. But as harmful as Iran’s activities in the region may be to the United States and its friends and clients, the inconvenient reality, particularly for Iranian hawks in the U.S., is that Tehran poses no imminent threat to America’s three core interests — preventing terrorism against Americans abroad or against the homeland, preserving the uninterrupted flow of oil from the Persian Gulf, and preventing Iranian acquisition of a nuclear weapon.

Iran has not attacked U.S. civilians in years and actually shares a common interest with Washington in fighting Islamic State in Iraq and Syria. Iran has repeatedly threatened to close the Strait of Hormuz between the Persian Gulf and the Gulf of Oman, through which 30% of all seaborne-traded oil flows. But it has not carried out those threats. Over the last year, Iranian naval units have ceased to harass U.S. naval vessels in the Persian Gulf and have not interfered with freedom of navigation on international waters. And despite its threats, Iran has not ramped up its enrichment of uranium for nuclear weapons.

In short, there’s no compelling justification for war, and nothing yet that approximates past triggers for U.S. military action, such as Saddam Hussein’s 1990 invasion of Kuwait, Al Qaeda’s 9/11 attack on the U.S., and the Trump administration’s 2017 and 2018 military retaliation for Syria’s use of chemical weapons.

Not only is a war with Iran unnecessary; it’s also risky and dangerous. America wields a preponderance of military force. But Iranian military forces and their proxies could cause serious damage to the U.S. and its allies. As they have done in the past, pro-Iranian militias in Iraq could target U.S. forces — causing significant casualties and endangering the U.S.-Iraqi relationship and the fight against Islamic State.

Hezbollah could attack Israel or U.S. forces in Syria and Iranian-aligned Houthi rebels in Yemen could fire more missiles at Saudi Arabia and commercial ships transiting the Red Sea. Iranian ballistic missiles and mines can interdict shipping in the Gulf and drive up the price of oil, and its cyber weapons, used in the past against Saudi Arabia, and missiles could destroy Persian Gulf energy infrastructure and U.S. naval combatants.

The U.S. can probably count on three countries — Israel, the United Arab Emirates and Saudi Arabia — to publicly support U.S. military attacks against Iran. The rest of the world will not rally to the Trump administration’s defense, particularly if it seems the U.S. was spoiling for a fight or overreacted with a hasty and disproportionate use of force. Washington’s unilateral withdrawal from the nuclear deal with Iran, which Tehran was complying with, has antagonized the other parties to that agreement (China, France, Germany, Russia, the United Kingdom and the European Union).

Similarly, the U.S. has alienated several countries, including India, Turkey, Greece, Italy, Japan, South Korea and Taiwan, to whom it had granted sanctions waivers for importing Iranian oil. Unprovoked U.S. military strikes will likely be met with global denunciations, especially if they drive up the price of oil. The United Nations will not sanction the use of U.S. military force nor will any of the world’s regional organizations. U.S. Secretary of State Michael R. Pompeo’s cool reception at the EU foreign ministers meeting in Brussels, and the disastrous U.S.-sponsored anti-Iran conference in Warsaw earlier this year, illustrate the dramatic failure to build a united transatlantic front against Iran and portends the negative reaction the U.S. is likely to get if it incites a war with Iran.

Military force should serve clear political and security objectives. But it’s hard to see the administration’s end game if it becomes embroiled in a sustained military conflict with Iran. Surgical strikes against Iranian nuclear facilities would only temporarily set back its nuclear program, and they would have to be preceded by large-scale attacks on Iran’s conventional air, naval and missile assets, which would cause civilian casualties and widespread destruction.

It is fanciful to believe that attacks on Iranian territory would provoke a popular uprising that would topple the regime — and even if it did, the new government would likely be more militantly anti-American than the current one. If the U.S. goal is regime change, it would require a ground invasion and U.S. occupation. We’ve seen how well that worked out in Iraq and Afghanistan — and Iran has a much larger population, much more territory and more ways to hurt the U.S. than both those countries.

The U.S. and Iran are locked into a long-term competition for influence and control in a volatile and dangerous region. Military strikes and war are not the answer — they will only make a bad situation worse. A mix of deterrence, transactional negotiations, renewed dialogue and, yes, military force if Iran acts against America’s vital interests, is the most effective way to manage that competition. As Winston Churchill is believed to have said, “meeting jaw to jaw is better than war.”

And when it comes to U.S.-Iranian relations, truer words may have never been spoken.

Aaron David Miller, a distinguished fellow at the Woodrow Wilson Center, has been a State Department Middle East advisor and negotiator in Republican and Democratic administrations. Richard Sokolsky, a non-resident senior fellow at the Carnegie Endowment for International Peace, was a member of the secretary of State’s Office of Policy Planning from 2005 to 2015.