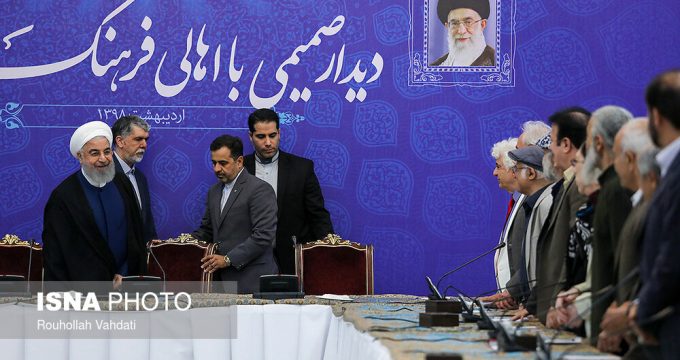 Rouhani rules out possibility of negotiations, urges for unity amid pressure

MNA – President Hassan Rouhani says that Iran will never give in to bullying behavior, calling on the nation to keep their unity in the face of outside pressures.

“We are men of negotiations and logic, but the party that tries to drag us to the negotiating table has only empty claims. We are not going to accept such talks even if all the powers of the world stand back to back to support them,” the Iranian President Hassan Rouhani said in a meeting with the artists and figures from the art community on Saturday evening.

Meanwhile, Rouhani said that the Iranian nation is wise and supports negotiations and is capable of holding talks as could be seen in the negotiations that resulted in signing the JCPOA with the major world powers.

The President referred to a UN Security Council session chaired by Donald Trump last September, saying that all the 14 members stood in support of Iran against the US.

He further urged the artists and the art community to help the nation keep their unity in the face of pressures by bringing happiness to them and giving them hope.