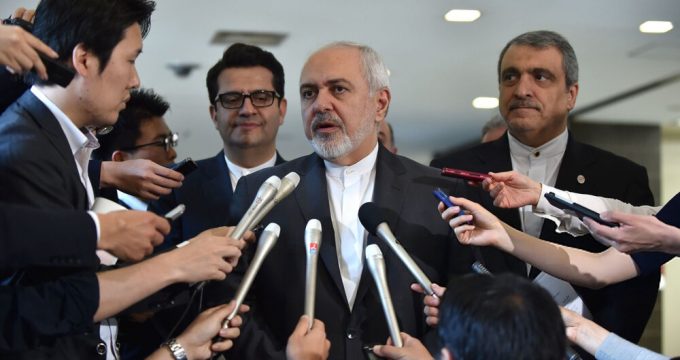 Tasnim – Iranian Foreign Minister Mohammad Javad Zarif said the policy of “Israeli first” is beginning to dominate the US ruling system and replace the proclaimed policy of “America First”.

Speaking to reporters before leaving Beijing for Tehran on Saturday, Zarif took a swipe at the so-called B-Team for shaping the US foreign policy and imposing its will on Washington.

“What has been mentioned as the policy of ‘America First’ in that country (the US) is turning into a policy of ‘Israel first’ or ‘certain reactionary regional rulers first’,” Zarif added.

The Iranian minister said those parties are employing “financial power and propaganda” as a leverage to impose their demands on the US government and establish formal authority.

“The fact is that (US President Donald) Trump has announced officially and restated recently that he does not favor a war, but certain individuals surrounding him are pushing him towards war on the pretext that they want to make the US more powerful in the face of Iran,” Zarif added.

The foreign minister further reminded the international community of its obligation to salvage the 2015 Iran nuclear deal, stressing that political stances and statements should be replaced with “practical economic measures” so that Iran can enjoy the benefits of the Joint Comprehensive Plan of Action (JCPOA).

Zarif on Saturday wrapped up a tour of Asia that took him to Turkmenistan, India, Japan and China.