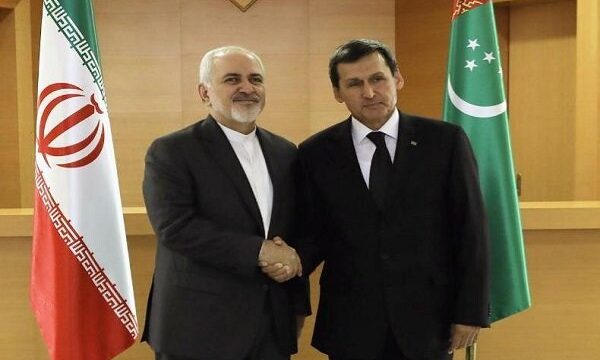 IRNA – Iran’s Foreign Minister Mohammad Javad Zarif arrived in Ashgabat Sunday at the head of a high-ranking delegation to discuss with Turkmen authorities bilateral issues as well as regional and international developments.

During this 2-day trip, he met with host country’s President Gurbanguly Berdimuhamedow and discussed the ways to expand bilateral relations, including political, trade, transportation, energy, customs, as well as the most important developments in the region and the world.

In a meeting with the President of Turkmenistan on Monday, Zarif conferred on various aspects of bilateral relations and the most important regional and international issues.

He also met with his Turkmen counterpart Rashid Meredov on Monday afternoon, saying that Iran and Turkmenistan are more than neighbors, and that the Islamic Republic of Iran is fully prepared for the expansion of relations between the two friends and neighbors.

Cooperation in international organizations, regional issues, in particular with regard to Afghanistan, holding joint economic commission between the two countries, imminent Turkmenistan’s president visit to Iran, transit and rail cooperation, cooperation in the field of energy and electricity, imprisoned citizens in two countries and the Caspian Sea were among the topics for dialogue between the two officials.

‘Turkmenistan and Iran have the political potentials for development of full-fledged relationship, Therefore, Ashgabat has a strong political will to extend its all-out relations with Tehran ‘Turkmenistan’s foreign minister said at the meeting, referring to the importance of zarif’s trip to Turkmenistan’.

Following the official visit, the two foreign ministers chaired a joint meeting of the two countries’ delegations, attended by representatives from the ministries of oil, road and urban planning and energy from Iran and Turkmenistan’s related sectors at the Turkmen foreign ministry in Ashgabat.

In the meeting, after discussions and technical and expert exchanges, significant improvements were made on the most important economic-commercial issues between the two countries.

Examining the status of Iranian and Turkmen prisoners in the two countries was among the issues raised at this expert meeting, as well as Zarif’s meeting with the president and his Turkmen counterpart, which was based on reports positive agreements have been reached in this regard.

Earlier, following the visit of Iranian President Hassan Rouhani to Ashkhabad and the subsequent consultations between the two countries’ authorities and in the context of the implementation of the transfer of the prisoners between the Islamic Republic of Iran and Turkmenistan, on March 28, 2018, 283 Iranian prisoners and a number of Turkmen detainees were exchanged at the Lutfabad border in the presence of judicial representatives of the two countries, as well as representatives of our embassy in Ashgabat.

Among the issues raised at the meetings of the Iranian Foreign Minister with the authorities and also at the joint meeting of experts, was the subject of the Caspian Sea legal regime.

Turkmen President Gurbanguly Berdimuhamedow approved international documents that he signed at a meeting on August 12, 2018 during a meeting of the leaders of the Caspian Sea Littoral States in Aktau, yesterday morning.

The documents included two additional protocols to the November 18, 2010 agreement on security cooperation in the Caspian Sea, in connection with the coordinated efforts of the border forces and cooperation in the fight against terrorism in the sea.

A Turkmen delegation also recently participated in a meeting held in the presence of the Caspian Sea Littoral States’ Defense Ministries recently in Astrakhan, Russia.

Officials in the meeting discussed the issues related to the implementation of the Caspian Sea Disaster Prevention Agreement signed last August during the 5th Summit of Littoral States in Aktau.

During the meeting, the sides confirmed that there was a high level of mutual trust among the Caspian littoral states’ fleets, and the delegations expressed their readiness to discuss the draft resolution on confidence building measures in the Caspian Sea in the future.

The important part of this convention was related to the security arrangements of the Caspian region, in particular the presence of foreign troops in this area.

At the end of this two-day visit Iranian FM evaluated the trip as positive and stressed that Iran-Turkmenistan’s cooperation in the areas of energy, transit, transportation and counter-narcotics is expanding.

‘I had good meetings with the president and the foreign minister of the country, and we talked about bilateral relations and regional and international issues,’ he said. ‘We agreed today on cooperation in all areas, including transport, in particular railways, energy and electricity, the issue of the Caspian Sea and the imminent trip of the Turkmen President to Iran will expand transit, trade and drug cooperation and other spheres more quickly,’ the foreign minister said, adding that the relations between Iran and Turkmenistan are very wide as neighboring countries and close friends.

He emphasized the development of cultural relations between the two countries, and said, ‘The cooperation between Iran and Turkmenistan in the field of culture is in the interests of the two countries and the people of the region and must progress.’

Zarif even told journalists about his trip to Turkmenistan at the time of his arrival in India, ‘I had a great trip to Turkmenistan, and we had good talks about bilateral and multilateral cooperation, so that it was in the interest of the people of both countries and region.