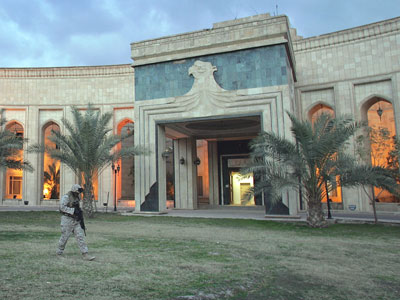 US issues security alert on Iraq amid regional tensions

AP — The U.S. Embassy in Iraq is advising U.S. citizens against traveling to the country amid what it called “heightened tensions,” reflecting worsening strains between Washington and Tehran.

The advisory was posted on Twitter on Sunday night. The U.S. has long advised its citizens against travel to Iraq, but the renewed warning followed Washington’s deployment of the aircraft carrier USS Abraham Lincoln and B-52 bombers to the Persian Gulf in response to unspecified “threats” by Iran.

The warning follows a surprise visit to Baghdad by U.S. Secretary of State Mike Pompeo last week which he said was aimed at demonstrating U.S. support for the Iraqi government, as the U.S. says it has been picking up intelligence that Iran is threatening American interests in the Middle East.

During his visit, Pompeo also said he wanted to underscore Iraq’s need to protect Americans in the country.

Tensions between the U.S. and Iran have rocketed since President Donald Trump pulled his country out of the 2015 nuclear treaty with Iran and re-imposed severe sanctions on Iran’s energy and finance sectors.

The strain has tested Iraq’s leaders as they try to balance relations between the two rivals. Iraq sees billions of dollars in cross-border trade with Iran and has close ties with Tehran after it stepped in to fill the political vacuum following the 2003 U.S. invasion.

But Iraq is also host to more than 5,000 U.S. servicemen and women invited by the Iraqi parliament in 2014 to assist in the war against the Islamic State group.