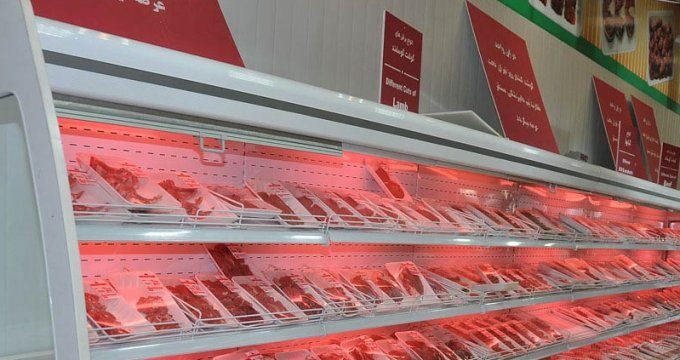 Bourse and Bazaar – Working class Iranians could look forward to a hearty meal of meat stew or kabob at least once a week. But with meat prices soaring to all-time highs, Iranians are having to cut back on their consumption in yet another example of falling living standards as Iran’s economy falters under the pressure of sanctions and mismanagement.

As of the first week of May, a kilo of beef sold for prices ranging from IRR 950,000-1,200,000 rials (USD 22-28) in butcheries across the capital Tehran. In October, prior to the reimposition of US secondary sanctions on Iran, the price of meat was just USD 11. By comparison, the minimum monthly wage of a menial worker in Iran has been set at approximately USD 361 dollars for the current Iranian year. An Iranian worker wanting to purchase one kilo of meat each week for their family would need to spend a staggering one-third of their monthly salary.

The rapid increase in the price of meat has been blamed on a variety of factors, including from corruption, profiteering, and misuse of hard currency subsidies granted to importers. The Iranian government has so far failed to slow the price increases as inflation continues to rise. Inflation has been driven by the sharp devaluation of the rial over the past year, accelerated by the reimposition of US sanctions on Iran after President Trump withdrew from the Joint Comprehensive Plan of Action (JCPOA) last May.

Iran has never been fully self-sufficient in meeting demand for beef. In the past decade, the country’s meat industry suffered a significant decline in its cow population, which fell from 18 million in 2010 to just eight million in 2018, most of which are dairy cows. Widespread droughts in the past two decades have also diminished pastures and significantly dwindled domestic livestock food supplies, requiring greater reliance on imported feed and making animal husbandry less profitable than ever.

In order to try and limit the impact of devaluation on the price of imported foods, the Iranian government decided last August to subsidize imports of 27 “essential products.” Under the new regulations, importers of those commodities would receive allocations of foreign exchange at the official rate of IRR 42,000 to the dollar, a rate far below the free market rate, which climbed as high as IRR 185,000 in October. Meat products and feed for livestock were included on the list as part of the government push to help alleviate the economic burden on Iranian households.

But the price of meat and other key foodstuffs has continued to rise, suggesting the foreign exchange subsidies were a failed policy. Disruptions in the importation of both animal feed and meat products added costs for importers and created constraints on supply. But more damagingly, the falling value of the rial and the availability of foreign currency at an artificially low price lured many importers into smuggling out livestock or imported food in significant quantities to neighboring countries, where they found a lucrative market, causing shortages back in Iran. In countries such as Iraq, smugglers could sell livestock and double their investment. In one reported case, a network led by an unassuming middle-aged woman collected sheep from villages in the southwestern Khuzestan province, loading them onto trucks and smuggling them to abattoirs across the Persian Gulf.  Profiteering has also come to include hoarding. Iran’s state broadcasters have aired videos of raided warehouses, where tons of meat are shown stored, with owners waiting for prices to increase further before bringing the meat to market.

An investigative report by Iran Newspaper, and republished by the ISNA news agency, points to the existence of a “meat mafia” which has caused much of the turbulence in meat markets. According to documents the paper says it has seen, one of the tycoons received over EUR 35.7 million in subsidized currency, but distributed the product after calculating the prices on the free market exchange rate, meaning he inflated prices by 92 percent. While much of the blame for high prices has been attributed to smuggling, the report challenges this explanation, suggesting smuggling accounts for just a small portion of the problem. According to the report, the smuggling explanation is an organized effort to cover up rampant corruption in meat production, supply and distribution. This claim is corroborated by an Iranian police report that put the total amount of smuggled meat at around “10,000 tons, while the annual national consumption is one million tons.” An unnamed official at Iran’s agriculture ministry even alluded to political motives, claiming, “The organized plot is not just about economic gains. There are other purposes behind it as well.”

But if such a mafia exists, critics of the Rouhani administration have shown no understanding, blaming the government for its inability to tackle the problem. Iran’s judiciary has sought to take some initiative through much publicized arrests and even executions of businesspeople convicted of major corruption unrelated to the meat industry.  But such shows of force seem to have had little effect.

More recently, the government has sought to import frozen meat to address shortages and try and induce lower prices. This triggered long queues as ordinary Iranians sought to purchase the subsidized meat. The lines themselves served to deepen public anger and sparked broad debates about how the government was insulting the “dignity” of Iranians by keeping them waiting for hours just to purchase low-quality meat.

Iranian civil society leaders have also sought to step in. Campaigns have been launched urging Iranians to reduce their meat consumption, for reasons ranging from reducing harm to the environment to improving health. In a controversial interview on state TV, Iranian actress Behnoush Bakhtiari suggested that the high prices might be a blessing in disguise that would push people to a healthier vegetarian diet. The comments spurred swift backlash on social media as the actress was accused of downplaying the government’s failure to assure Iranians a basic standard of living.

The government also sought to impose price controls on butchers in an effort to ease pressure on consumers. But that move “only cost many butchers their job,” a senior member of the Tehran Butchers’ Trade Union told Bourse & Bazaar asking not to be named due to the sensitivity of the matter. “Many of our colleagues found it no longer profitable to continue. They had to shut down their shops and start planning a new business.”

At last, having failed to regulate prices directly, the government has decided to eliminate the subsidized foreign exchange rate for importers. The move has been hailed by many economic commentators as a step towards exchange rate unification, a move, which proponents argue, will eliminate the space for arbitrage. But the impact of the move has yet to be seen.

Whatever the reasons behind the turbulence in the meat market, the impact on ordinary Iranians is undeniable. 36-year old Ramin, who asked his last name not be used, owns a small butchery in Tehran’s affluent northwestern Sa’adat Abad neighborhood and has seen the collapse in purchasing power up-close. “I know costumers who used to buy at least five kilos of beef a month, but now their purchase has dropped to two kilos,” he told Bourse & Bazaar. “There are even those who have completely removed meat from their baskets, buying only bones just to have a flavor of meat in their cooking. And I’m talking about this rich neighborhood. You can imagine how those in [less-affluent] southern Tehran are being squeezed.”

Iran red meat price, Iran's inflation rate, US sanctions against Iran May 12, 2019
The dangers in Trump’s warlike approach to Iran
Europe should challenge the US sanctions on Iran