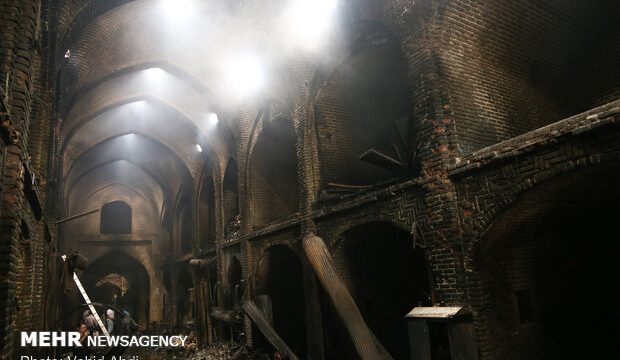 MNA – A blaze that erupted at the historic Bazaar of Tabriz, northwest Iran, on Thursday is estimated to have caused about 200 billion rials ($1.33 million) to the centuries-old site.

Mohammad-Hassan Talebian, a deputy at Iran’s Cultural Heritage, Handicrafts and Tourism Organization (ICHHTO) made the announcement on Saturday, saying that the renovation of the historic bazaar, which dates back to 1,000 years, will start as soon as possible.

“An agreement will be forged between ICHHTO and all the related organizations to commence the reconstruction project of the bazaar in the near future,” he said.

The fire was fully put out after six hours.

The Bazaar of Tabriz has been a UNESCO World Heritage Site since 2010 and was mentioned by Marco Polo when he traveled the Silk Road in the Middle Ages.

There was no word on what started the fire. The Bazaar of Tabriz has seen several fires over the past years due to the disregard of safety measures.