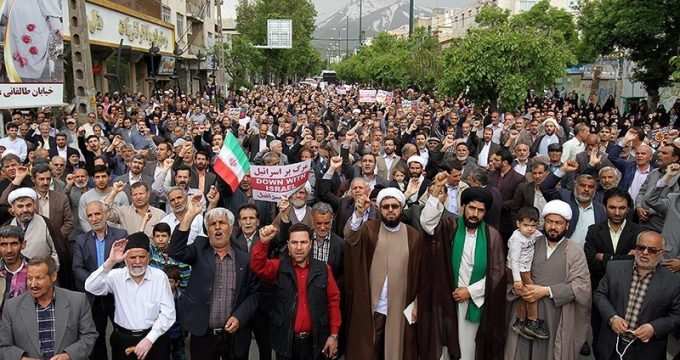 IRNA – Iranians held nationwide rallies expressing support for the decision of Iran’s Supreme National Security Council (SNSC) to suspend the implementation of some of Iran’s commitments under the JCPOA in response to the United States’ withdrawal from the deal.

Exactly one year after the US unilateral exit from the JCPOA, President Rouhani said on Wednesday that Iran will give a 60-day moratorium to the states parties to the deal to remedy their breaches and restore Iran’s interests enshrined by the international accord.

The rallies took place after Friday prayers as people across the country marched and chanted slogans and held placards in support of the decision.

Demonstrators in Tehran finished the rallies by issuing a statement welcoming the decision and warning the US against any further provocation against the country.

The statement also called for a full suspension of the Joint Comprehensive Plan of Action (JCPOA) if European signatories further failed to uphold the deal.

Iranian foreign minister in a message referred to US bullying toward the world, saying the European Union should uphold obligations, including normalization of economic relations.

‘EU statement today is why JCPOA is where it is: the US has bullied Europe—and rest of world—for a year and EU can only express ‘regret,’ Mohammad Javad Zarif wrote in his Twitter account on Thursday.

He added: ‘Instead of demanding that Iran unilaterally abide by a multilateral accord, EU should uphold obligations – including normalization of economic ties.’