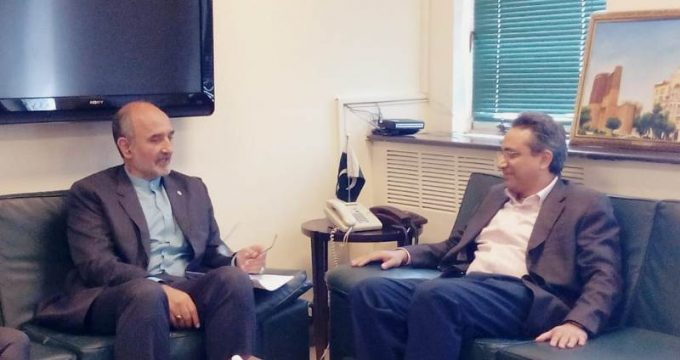 IRNA – Ambassador of Iran to Pakistan Mehdi Honardoost called on Special Assistance to Prime Minister on Petroleum Nadeem Babar here on Wednesday and discussed prospects of cooperation between the two friendly neighboring states in oil and gas sectors.

They vowed to further enhance cooperation between the two countries in all spheres, especially in the energy sector.

Expressing his views, Ambassador Honardoost said that there is a need to explore commercial and economic potentials of the two countries to achieve the goal of $5 billion trade volume in the coming years.

He said that the two countries should enhance their cooperation in oil and gas sector to boost their bilateral trade volume.

The ambassador also called for joint efforts by Tehran and Islamabad to complete the gas pipeline project from Iran to Pakistan.

Special Assistance to Prime Minister on Petroleum Nadeem Babar said energy cooperation with Iran would benefit Pakistan. He said that continuation of talks between the two states would help to build strong energy cooperation between Iran and Pakistan.