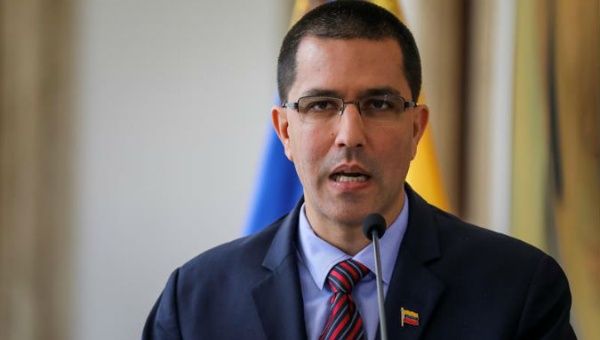 ‘A lot to learn from Iran’: Tehran helps Venezuela ‘survive’ under US sanctions, FM Arreaza says

RT – Iran, which has been living under tight US sanctions for several decades, is consulting the crisis-hit Venezuela on how to overcome economic blockade and boost production, Foreign Minister Jorge Arreaza revealed.

For several decades, Tehran “has been growing its economy under the [US-imposed] sanctions in a bid to seek independence in various industries,” Arreaza told reporters during his visit to Moscow. Explaining further, he said Iran has indispensable experience in defying continuous US pressure.

We have a lot to learn from Iran. We have Iranian consultants in Venezuelan government that help us survive the blockade and boost production.

Iran has been suffering from US-imposed sanctions since the 1979 Islamic Revolution which toppled the pro-Western Shah Mohammad Reza Pahlavi. The restrictions targeted Iranian finances, exports and imports, as well as energy and the military.

Most of the sanctions that crippled Iran’s economy were lifted after Iran and the five world powers, the US, the UK, France, China and Russia, plus Germany, signed the 2015 nuclear deal. But the US has unilaterally quit the landmark accord under President Donald Trump who labeled it as “the worst deal ever,” and reimposed the sanctions last November.

Likewise, the US slapped Venezuela with restrictions targeting the Latin American country’s oil industry, including the major state-run company PDVSA. These sanctions were strongly condemned by Caracas which dismissed them as economic blackmail.

Iranian advisory aside, Venezuela is seeking alternative ways of dealing with friendly countries around the world, including China and Russia. “These methods and routes aren’t built up overnight, we need much time to create them,” he admitted.