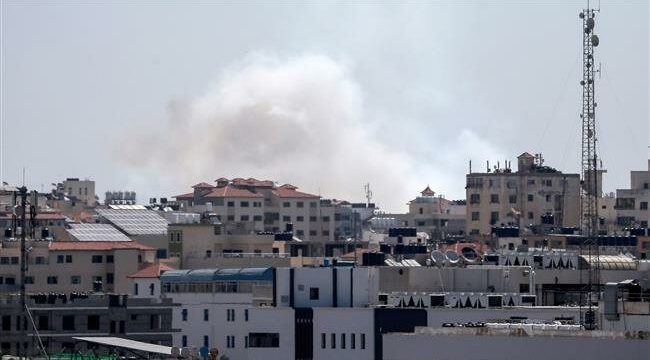 The aerial assaults on Saturday followed the retaliatory firing of around 90 rockets from Gaza into the occupied territories on Saturday morning. The rocket fire activated warning sirens in multiple Israeli communities.

Palestinian sources said that the Israeli airstrikes had left two people dead and several others wounded in northern Gaza.

The rocket attacks came in retaliation for the killing of four Palestinians on Friday, two in an Israeli air raid on southern Gaza Strip and two by the regime’s live fire in anti-occupation protests in the besieged coastal enclave.

The Hamas resistance movement, which runs Gaza, held Israel fully responsible for the consequences of its aggression against peaceful Gaza demonstrations.

In a press release on Saturday, Hamas vowed to avenge the killing of the four Palestinians, stressing that the Gaza resistance would not allow the Palestinian blood to go in vain and would not remain silent on the Israeli blockade.

The Tel Aviv regime carries out regular attacks on the Gaza Strip under the pretext of hitting positions belonging to Hamas.

The coastal sliver of land has been under a crippling siege by Israel since 2007 and witnessed three wars since 2008.

It has also witnessed tensions since March 30, 2018 which marked the start of the Great March of Return protests, with participants demanding the right to return for those driven out of their homeland.

The Gaza violence has so far left at least 268 Palestinians dead, according to the Gaza Health Ministry.