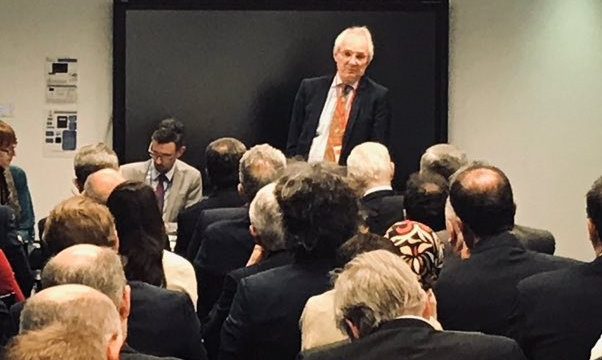 IRNA – Director of the Instrument in Support of Trade Exchanges Per Fischer and the British government officials told the economic activists and UK companies interested in trade with Iran that from now on they can use INSTEX.

During the meeting which was organized by Department for International Trade and Iran-UK chamber of commerce, British officials held talks on the way to facilitate the economic interactions between two sides.

Meanwhile, Iran Ambassador to the UK Hamid Baeidinejad said Fischer had announced that despite existing challenges, INSTEX is seriously after maintaining its first trade exchange with Iran very quickly.

In the meantime earlier, Fischer in an interview with IRNA expressed happiness over his attendance in London meeting which would result in more interactions with UK banks and companies.
Earlier, former UK foreign secretary Jack Straw said the UK along with Germany and France are not only firmly committed to the JCPOA, but they are also working very hard to set up the Special Purpose vehicle (SPV).

The UK political figure described the US move to violate UN Security Council Resolution 2231 and re-impose unilateral sanctions on Iran as ‘an attempt to impoverish the Iranian people’, noting that such measures very rarely hit the elites of Iran but will hit the ordinary people of the country.