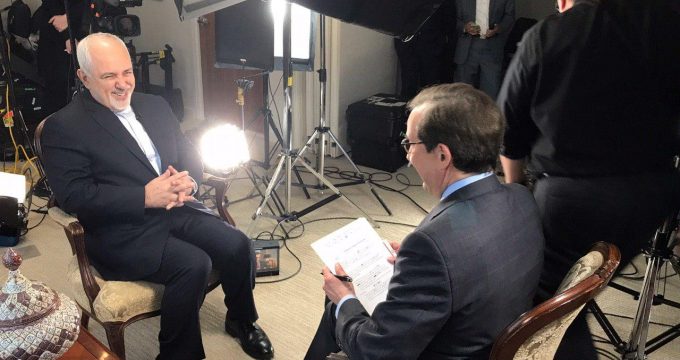 “Fox News is [US President Donald] Trump’s media outlet. This move (Zarif’s interview) shows Zarif wants to talk to Trump directly. I regard it as a good move, but as to how Trump will deal with it, I feel Trump is preparing his tweet,” the former diplomat said.

Tajik said the Iranian foreign minister’s trip to New York began with a good approach and a “domestic prelude.”

“In my opinion, Trump’s team is comprised of different people, too, and we should not regard them as being all the same,” he noted.

“John Bolton has a certain viewpoint, Pompeo has another, and the State Department has a different view. We should not treat the United States as one whole. Rather, we should try to address different sectors inside the US, namely the American people,” Tajik stressed.

“Upon arrival at the meeting, Mr Zarif reiterated the offer to swap prisoners, which shows we have also taken a humanitarian approach into consideration and wouldn’t like our issues with the US to edge toward animosity and confrontation,” said Tajik, who is also an expert on foreign policy issues.

Tajik said he believes Zarif’s visit took place in coordination with the Iranian government and was aimed at “managing” the hostility between Iran and the United Sates, “And it is a good move.”

He then touched upon domestic problems in Iran, namely economic problems and other issues, adding, “We’d better ease tensions in our foreign policy as much as possible.”

He also referred to Washington’s flip-flop on Iran.

“On the one hand, as [US Special Representative for Iran] Brian Hook says, the Americans are seeking talks; but on the other hand, they, for example when we put forward the idea of a prisoner swap, did not welcome the proposal as much as they should have with regards to the humanitarian aspect of the issue,” said Tajik.

“I hope Zarif’s interview with Fox News will somehow persuade the Americans to do something which would enable us to follow up on these messages, including the issue of prisoners as well as other issues,” said the ex-diplomat.

“Trump respects Fox News as much as he is furious at CNN,” he noted.

“If Zarif had had an interview with CNN, we could say he intended to deal a blow to Trump. But when he gives Fox News an interview, that means Zarif wants to say his words to Trump directly and open up an opportunity for the next steps,” said Tajik.

He then touched upon the problems between Iran and the United States as well as the approach adopted by Trump.

“We shouldn’t expect all issues to be settled, or rapidly move towards settlement during this trip,” said the former diplomat.

“If the two countries set the stage for listening to each other and prevent the deterioration of their relations, it will be a good opportunity,” he said.

“North Korea and the United States moved toward nuclear threats, but an event, i.e., the Seoul Olympics were utilized and it initiated a relationship between them followed by negotiations,” he noted.

“The negotiations got nowhere due to Trump’s excessive demands, approach and way of treating countries, but it was a positive move as it warded off a nuclear threat in the world,” he said.

Meanwhile, Zarif himself has weighed in on the reasons behind his interview with Fox News.

He said the interview was done to establish a connection with that group of American people who are supporters of Trump.

“It was necessary to remind them that US interests were falling victim to the interests of Israel and a bellicose group,” Zarif explained.

“This reality is nothing new, but they have tainted the atmosphere with so much propaganda and rowdyism that many of those who believe in this reality do not dare even talk about that reality. That is why expressing these realities is necessary in this environment and can help break this climate of oppression which runs counter the claim that freedom exists there,” said the Iranian foreign minister.

“We countered sanctions for 40 years as we needed to, and we have a PhD now in the field of countering sanctions,” said Zarif.

“The Islamic Republic of Iran has managed to weather sanctions with reliance on people. This time, too, Iranian people are present with more solidarity and unity than ever in the face of US pressure, and we, as the government, have a duty to minimize these pressures,” he noted.