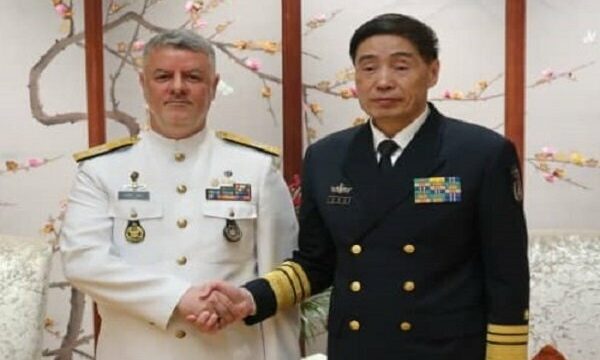 MNA – “The world should know that the presence of trans-regional forces in north of the Indian Ocean is pointless and security would be provided merely by cooperation among regional countries,” the Commander of Iranian Army Navy Rear Admiral Hossein Khanzadi said on Monday.

The Iranian commander made the remarks on the sidelines of the 70th anniversary of Chinese navy and in his meeting with Commander of the People’s Liberation Army Navy Shen Jinlong in Qingdao.

“Due to the strategic geopolitical position, China’s presence in the Pacific and that of Iran in north of the Indian Ocean, has made arrogant powers to leave our maritime territories,” he said, “there is no need for the presence of outsiders.”

“Taking advantage of their joint sea borders, Iran and China can reinforce technical and educational cooperation between their navy forces,” he added.

Regarding the upcoming Iran-Russia naval exercise, commander Khanzadi called for China to take part in the event.

The Chinese commander, for his turn, voiced his country’s readiness for expanding naval ties with Iran.

Heading a high-ranking military delegation, Khanzadi left Tehran for China on Saturday morning to attend Chinese Navy anniversary and to enhance bilateral cooperation between the navies of Iran and China.