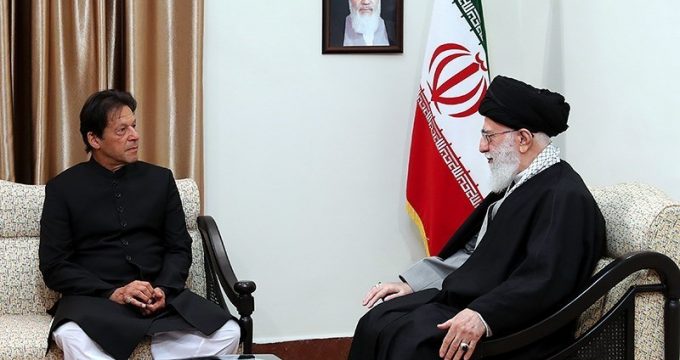 Iran-Pakistan ties should be strengthened against enemies’ will: Ayat. Khamenei

MNA – The Leader of the Islamic Republic Ayatollah Seyyed Ali Khamenei has stressed that the Iran-Pakistan ties should be strengthened against the will of their enemies.

The Leader of the Islamic Republic Ayatollah Seyyed Ali Khamenei made the remarks in a meeting with the visiting Pakistani Prime Minister Imran Khan and his accompanying delegation in Tehran on Monday afternoon.

“Good relations are in the interest of both countries, but this relationship has serious enemies that must be strengthened in different areas, against their will,” the Leader of the Islamic Republic said in the meeting.

Referring to the historical roots of the ties between the two nations, the Leader asserted “the dignity and majesty of the Indian peninsula were highest during the time Muslims ruled over it, and the biggest blow that the British stroke in this important area was abolishing the prominent Islamic civilization.”

Ayatollah Khamenei praised great Pakistani figures like Muhammad Iqbal Lahori and Muhammad Ali Jinnah and urged the two nations to boost friendly ties, adding that “good relations will benefit both countries. However, these relations incite serious animosities from the enemies; however, counter to enemies’ aspirations, the collaborations and relations should strengthen in different areas.”

He regarded security issues at Pakistan-Iran borders as exigent and added “the terrorist groups that are responsible for disturbing security at the borders are backed by enemies’ money and arms. The anti-security moves at the frontiers of Iran and Pakistan seek to hurt the friendly relations between the two countries.”

In the meeting, with President Hassan Rouhani in attendance, Imran Khan, the Prime Minister of Pakistan, referred to his negotiations in Tehran as effective and pointed out “during these negotiations, many issues were resolved, and Pakistani ministers also held good talks with their Iranian counterparts.”

Referring to the historical relations between Iran and India, the Pakistani Prime Minister stated “Muslims ruled over India for 600 years, and the influence of Iran on them was such that the official language of the Indian government was declared Persian.”

Imran Khan maintained that the biggest pillage of India’s wealth happened during the colonization of the country by Britain and went on to say “the British pillaged all the wealth of India, destroyed its educational system and named India ‘their precious colony’.”

The Pakistani Prime Minister pointed out that some do not want the relations between Tehran and Islamabad to strengthen; nevertheless, the two nations can overcome the obstacles, and added “we will try to make the relations between the two countries stronger than before and we will be in constant contact with the Islamic Republic.”