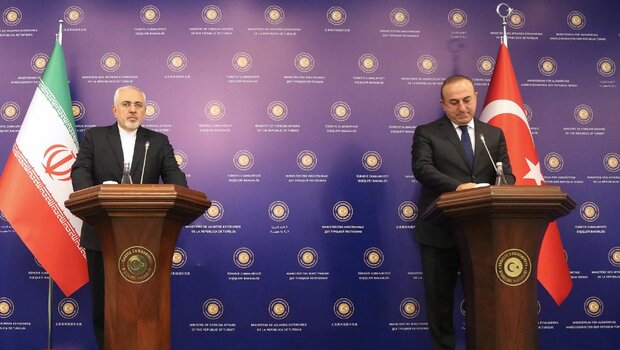 MNA – Iranian Foreign Minister Mohammad Javad Zarif says the deployment of the Syrian army along the borders with Turkey is the best way to preserve stability and security in the region.

The Iranian diplomat made the remarks during a joint press conference with his Turkish counterpart Mevlut Cavusoglu in Ankara on Wednesday.

Zarif arrived in Ankara this morning after a one-day visit to Syria and holding talks with the country’s high-ranking officials in Damascus on Tuesday.

During the press conference, he said that deploying the Syrian army at the borders with Turkey will assure Ankara that no terrorist movement would threaten the Turkish government and nation from inside the Syrian territory.

The Iranian official added that the Islamic Republic never intends to interfere in other countries’ internal and international affairs, but it wishes that its neighbors maintain friendly and peaceful ties.

Noting that the aim of his visit to Turkey is to confer on regional developments, especially those in Syria, Zarif said, “I had a long discussion with Syrian President Bashar al-Assad [on Tuesday] and I will share the details of the meeting with President Recep Tayyip Erdogan.”

The Iranian top diplomat is slated to meet with Erdogan later today.

Discussing the upcoming Astana-format Syrian settlement talks will be on Zarif’s agenda during the meeting with Erdogan.