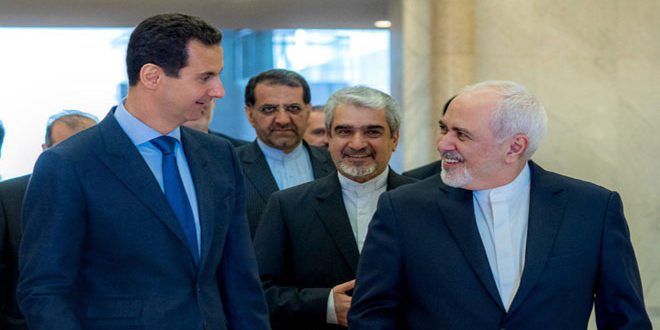 During the meeting, President al-Assad reiterated Syria’s denouncement of the irresponsible US action against the Iranian Revolutionary Guard, saying that it is part of erroneous US policies that constitute a main factor in instability in the region.

President al-Assad expressed heartfelt condolences to the Iranian people and the families of the victims of the recent floods that affected a number of Iranian provinces recently.

For his part, Zarif denounced the US administration’s decision regarding the occupied Syrian Golan, saying that this decision cannot be separated from its decisions on al-Quds (Jerusalem) and the Revolutionary Guard, and that these decisions are a sign of the failure of Washington’s policies in the region.

The two sides exchanged opinions on regional developments, with President al-Assad asserting that adhering to national principles and positions and making the people’s interests a priority are enough to protect any country, preserve its unity, and confront any foreign conspiracies.

Zarif said that developments in the region prove the need for enhancing coordination between the two sides on all levels to benefit the two countries and enhance security and stability in the region.

President al-Assad and Zarif asserted that the policies of the US and some Western states will not dissuade Syria and Iran and their allies from defending the rights and interests of their peoples.

The two sides not that the West, particularly the United States, should resort to diplomacy instead of waging warriors and employing economic terrorism against those who disagree with them.

The meeting touched on the next round of Astana talks, stressing the importance of coordination between Damascus and Tehran to achieve Syria’s national interest.

Talks also dealt with the agreements between the two sides, joint projects, their stages of implementation, and the difficulties facing them, as well as expanding cooperation in the future.