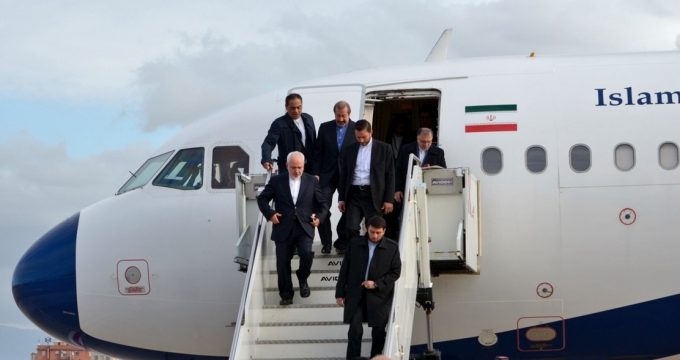 Upon arrival at the Damascus International Airport on Tuesday morning, Zarif was welcomed by Iran’s Ambassador to Damascus Javad Torkabadi, Syrian Deputy Foreign Minister Faisal Mekdad, and the officials and chief executives of a number of Syrian-based Iranian organizations.

Zarif is accompanied on his one-day visit to Syria by senior aide for special political affairs Ali Asghar Khaji, the Iranian Foreign Ministry Spokesman Abbas Mousavi, assistant secretary and Secretary General of the Middle East and North Africa Department, Hamid Reza Dehghani, and a number of other ministry officials.

The visit comes upon the official invitation of the Syrian president.

Zarif’s visit is a follow-up on the constant negotiations between Iran and Syria on bilateral ties, including the agreements made between Assad and President Hassan Rouhani during the Syrian president’s visit to Iran earlier in February.

Syrian President Bashar Assad made an unannounced visit to Iran, he met with the leader of Islamic Revolution Seyed Ali Khamenei and other top Iranian officials including President Hassan Rouhani to discuss mutual relations as well as the planned US troop withdrawal and efforts to set up a buffer zone in northern Syria.

The two sides will talk over the latest regional and international developments and explore the avenues for preserving the peace in the region.

Zarif will leave Syria for Turkey next to hold separate talks with the country’s senior officials. His visit to Turkey comes a week before the Astana-format Syrian settlement talks, which will be held in the Kazakh capital of Nur-Sultan on April 25-26, in attendance of the Iranian, Turkish and Russian officials.