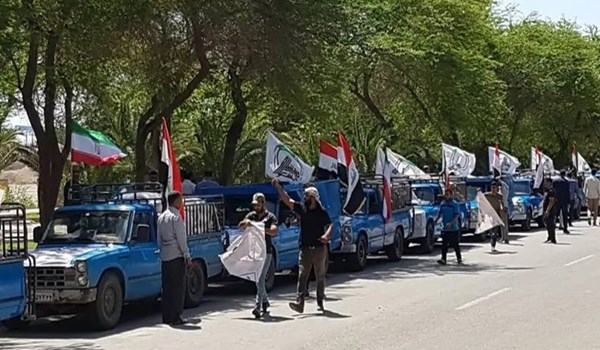 FNA – The Union of Muslim Clerics of Iraq (UMCI) initiated an “appreciation campaign” in Diyala Governorate of the Arab country to collect money for Iranian victims of the recent floods to make up for all the helps provided by Iranians in the years of the war against the ISIL terrorists.

The UMCI has so far managed to collect 90 million dinars (equal to almost 75,000 US dollar) to send humanitarian aid to the flood-hit people of the neighboring country of Iran.

Head of the UMCI Jabbar al-Ma’mouri told an Iraqi news outlet that the campaign has entered its 6th day, and so far people from all walks of life and different sects and faiths have contributed to the call.

Al-Ma’mouri added that the campaign will keep calling for donations till the flood crisis in Iran has been fully taken care of.

According to the Iraqi cleric, the campaign will use the money to purchase the needed goods and food for the affected people.

He added that 1000 flood-hit people will be helped with the money so far collected.

Unprecedented rainfalls since March 19 triggered disastrous floods in Iran. The tragedy started in the four Northern provinces of Mazandaran, Golestan, Semnan and North Khorassan on March 20. Thirty provinces of Iran have been hit by severe weather conditions since then.

Last week, the Iranian Red Crescent Society (IRCS) announced that Tehran has not been able to receive any foreign financial aid because of Washington’s “inhuman” sanctions against the country.

“No foreign cash donation has been made to the Iranian Red Crescent Society yet and basically there are no financial channels available to do this,” the IRCS said in a statement on April 7.

“Some institutions and countries have expressed their readiness to donate and also declared certain sums of money; but as a result of the inhuman US sanctions, there is no way to send this cash assistance” to Iran, the statement added.

The IRCS emphasized in another part of its statement that despite US officials’ claims, Washington’s sanctions have caused difficulties in the way of helping people affected by flooding and influenced logistical capacities, particularly air relief.

The IRCS has not been able to buy new aid helicopters due to the unilateral sanctions imposed by the US and is also facing difficulties for buying spare parts to maintain its existing aid helicopter fleet, the statement added.

Official accounts are confirming that so far 76 lives have been claimed by the recent floods in Iran, while hundreds of thousands have been left homeless.