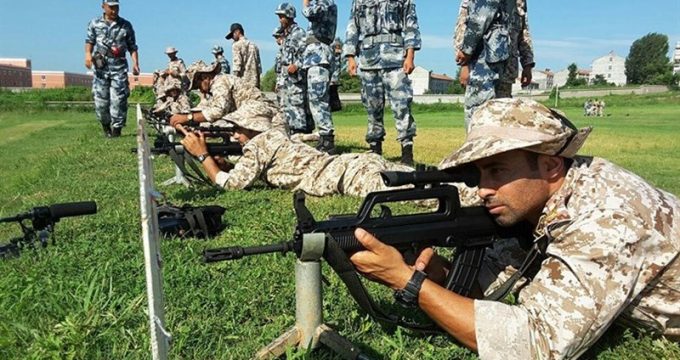 Why the US is targeting Iran’s Revolutionary Guard

Bloomberg | Ladane Nasseri: President Donald Trump’s administration has named Iran’s Revolutionary Guard Corps a terrorist organization, the first time the U.S. has applied that designation to a part of another government. The Revolutionary Guard is officially the protector of the Islamic revolution and also wields significant economic might. Scholars estimate that the Guard controls from 20 percent to 40 percent of Iran’s economy.

1. What is the Revolutionary Guard?

The nation’s premier security force, the 100,000-strong corps has its own ground, air and naval divisions, controls Iran’s ballistic missile program, and has a chain of command separate from the military that leads directly to Iran’s highest authority, Supreme Leader Ayatollah Ali Khamenei. It was established at the outset of the 1979 Islamic revolution, a time when the military’s loyalty to Iran’s new leaders was unclear. The Guard helped defend the country during the eight-year-long Iran-Iraq war, then redirected its resources to postwar reconstruction starting in 1988. In recent years, Revolutionary Guard members have provided military support in Syria, a strategic ally of Iran, to help President Bashar al-Assad’s regime beat back rebel forces. The Guard has amassed sweeping commercial interests, including in Iran’s energy and construction industries.

2. What’s the alleged connection to terrorism?

The U.S. has listed Iran as a state sponsor of terrorism since 1984. It says the Revolutionary Guard, notably through its Qods Force, or international brigade, plays the foremost role among Iranian actors in carrying out acts of terrorism. Notably, a U.S. federal court found Iran and the Guard bore significant responsibility for the 1996 bombing of a housing complex in Saudi Arabia in which 19 U.S. service members died. The U.S. also holds the Guard responsible for providing assistance to a variety of groups that have carried out attacks, including Lebanon’s Hezbollah movement and Iraqi Shiite groups.

The designation is the latest step in a U.S. push to starve the Iranian regime of access to cash. The Trump administration has been seeking new ways to ramp up pressure on Iran since Trump withdrew the U.S. from the 2015 multinational accord in which Iran agreed to constrain its nuclear program in return for relief from international sanctions. That deal was meant to persuade Iran to change its behavior by strengthening its links with the rest of the world, whereas Trump is betting that economic isolation will force the regime to switch course.

4. What effect does the terrorist designation have?

It exposes considerably more of the Iranian economy to both direct and secondary U.S. sanctions. Even before the designation, the U.S. directly sanctioned several Guard commanders and a number of Iranian firms linked to the forces. That means contractors who do business with the U.S. government cannot have “significant transaction with” the Guard, and sanctions are imposed on individuals who “materially assist” the Guard and on foreign banks that conduct significant business with the force. With the Guard designated a terrorist group, many more Iranian companies will join the list of those that foreign companies can’t legally work with. At least 229 Iranian companies are significantly under the influence of the Guard, according to one study, compared with 25 Guard-connected companies previously under U.S. sanctions.

5. How has Iran reacted?

Shortly after the U.S. announcement, Iran’s Supreme National Security Council designated U.S. Central Command, which oversees U.S. armed forces in the region, as a “terrorist organization.” Foreign Minister Mohammad Javad Zarif accused U.S. armed forces of “open and covert backing of terrorist groups” in the Middle East, according to a report by the state-run IRIB news channel. He portrayed the U.S. move as an “election-eve gift” to Prime Minister Benjamin Netanyahu of Israel, who agrees with Trump on the need to isolate Iran. Iranian officials say the Guard isn’t a separate entity but a vital institution that helps protect Iran from external threats and ensure its national security and sovereignty. Iran’s Khamenei lauded the Guard’s role in defending the nation and said U.S. “plots” won’t bear results.

April 11, 2019
IFX touches a new record high in past Iranian year
Will Iraq reemerge as battleground between US, Iran?