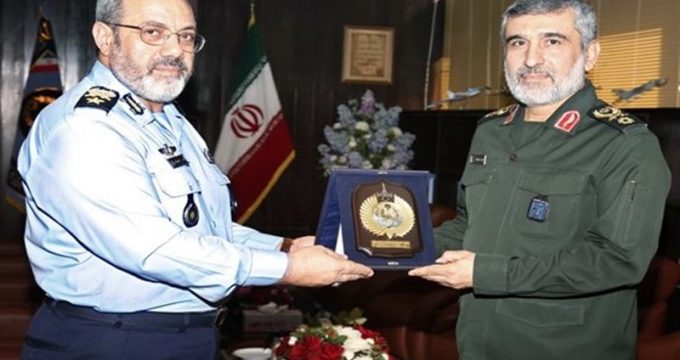 Armed forces not to allow Iran’s Exemplary security to be endangered: IRGC commander

Speaking at a meeting with Commander of the Islamic Republic of Iran Air Force (IRIAF) Brigadier General Aziz Nasirzadeh in Tehran, Brigadier General Hajizadeh highlighted the “synergy” between the IRGC Aerospace Force and the IRIAF and their role in furthering Iran’s defensive strategies and policies.

“The enemy has always targeted this unity and synergy and pursues its empty goals and dreams in this area with various tricks…,” he warned.

The commander further hailed the Iranian nation’s massive support for the IRGC in reaction to a recent hostile move by the US government to label the force as “a terrorist group” and said, the Armed Forces, relying on the wise guidelines of Leader of the Islamic Revolution Ayatollah Seyed Ali Khamenei, will never hesitate a moment to counter threats posed by the enemies, the US in particular.

They will not allow anybody to endanger the Iranian people’s “exemplary security and tranquility”, the commander went on to say.

In a statement on Tuesday, the Iranian Army condemned the US move to blacklist the IRGC as “illegal and unwise” and said the Army is resolved to defend the Islamic Republic “hand in hand” with the IRGC.

The statement came after the Trump administration on Monday labeled IRGC as a “terrorist group” at the behest of Israeli Prime Minister Benjamin Netanyahu.

Israelis head to the polls on Tuesday to elect the 120 members of the 21st Knesset (parliament). On the eve of the vote, Netanyahu took credit for Trump’s decision to blacklist IRGC.

“Thank you, my dear friend, President Donald Trump,” Netanyahu tweeted in Hebrew, “for answering another one of my important requests.”