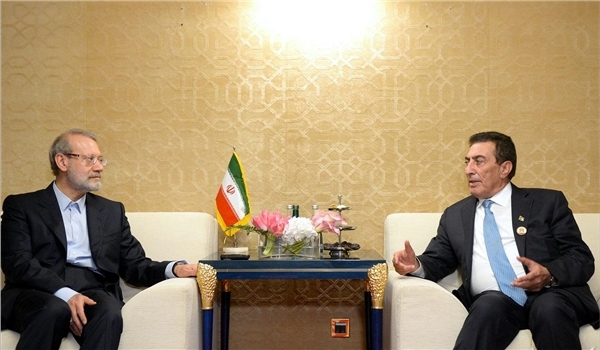 FNA – Iranian Parliament Speaker Ali Larijani reiterated that the holy city of Jerusalem al-Quds will be the capital of Palestine forever, underlining the need to focus on the fate of Palestine as the main issue of the Muslim world.

Larijani, in a Sunday meeting with his Jordanian counterpart Atef Tarawneh on the sidelines of the 140th General Assembly of the Inter-Parliamentary Union (IPU) underway in the Qatari capital city of Doha, said that the situation in the region is such that the Islamic countries have neglected major issue of the Islamic world which is Palestine.

Larijani highlighted the issue of Palestine as the major issue of the Islamic world which should not be ignored by the Islamic states, saying that today, nobody supports US President Donald Trump’s decisions and actions in the international scene.

“Conditions are prepared for Muslim countries’ coalition against their major enemy,” he said.

Unfortunately, Islamic states are today engaged with other issues, but the major Islamic world’s issue, Palestine, requires Muslim countries’ special attention, due to the spread of terrorism and Israel’s everyday attacks on al-Aqsa Mosque.

The same view was expressed by the Jordanian speaker, who said concerns over the Israeli aggressions on al-Aqsa mosque make it necessary for Muslim states to pay special attention to the issue of Palestine.

Jordan is the official custodian of holy Muslim sites in Jerusalem al-Quds, and is the only Arab country apart from Egypt to have diplomatic relations with the Tel Aviv regime.

In another meeting in Doha, Larijani told his Omani counterpart Sheikh Khaled Bin Hilal Al-Maouli that the situation in the region is such that the Islamic countries have neglected major issue of the Islamic world which is Palestine.

Earlier on the day, in an address to the 140th General Assembly of the IPU, the Iranian parliament speaker condemned the Israel’s recent aggressions on Al-Aqsa mosque and other holy sites in Jerusalem al-Quds as well as Tel Aviv’s ethnic cleansing and expansionist, anti-human, and illegal measures, describing them as a result of ridiculous American-Israeli shows.

“The two regimes (the US and Israel) have always tried to create bigger challenges and troubles in a bid to do their own business in a destabilized region,” he said.

However, Larijani said, Muslim nations have shown they will never accept policies that serve the interests of the US and Israel.

The 140th Assembly of the IPU kicked off on Saturday and will come to an end on Wednesday. The event is participated by parliamentary delegations from 180 countries around the world.