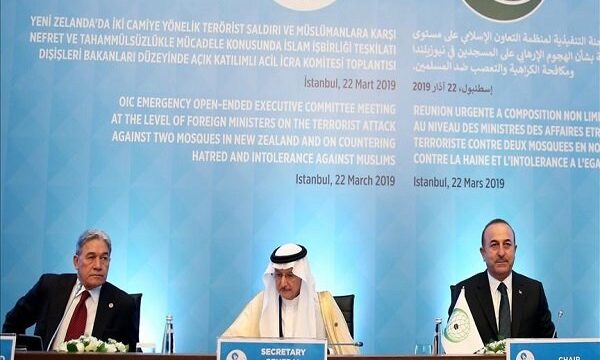 MNA – Members of Organization of Islamic Cooperation are holding an emergency meeting in Istanbul after last week’s twin mosque attacks in New Zealand to address Islamophobia across the world.

According to Anadolu, Turkey’s foreign minister said in the meeting that his country will stand up against all forms of hate speech, violence and terrorism.

He said no religion or belief can be defined by violence and terror, adding that peace is at the core of Islam.

He said the attacks in New Zealand were a “turning point” for Muslims, adding Muslim nations will not be deterred from taking steps to curb violence.

New Zealand’s foreign minister told the OIC meeting that his country attached great importance to freedom of religious belief, adding that the attacks on Muslims “are attacks on all of us.”

Winston Peters said New Zealand launched the biggest police investigation in the country’s history after the mosque attacks, adding that the perpetrators of the attacks will spend the rest of their lives in jail.

Friday marks exactly one week since the attacks on the Al Noor and Linwood mosques in Christchurch, which claimed the lives of 49 people.

Australian-born Brenton Tarrant, 28, has been charged for the massacre and is being held at a maximum-security prison in Auckland.

Among the victims were four children under the age of 18. Other children are still being treated at local hospitals for injuries they sustained during the attack.