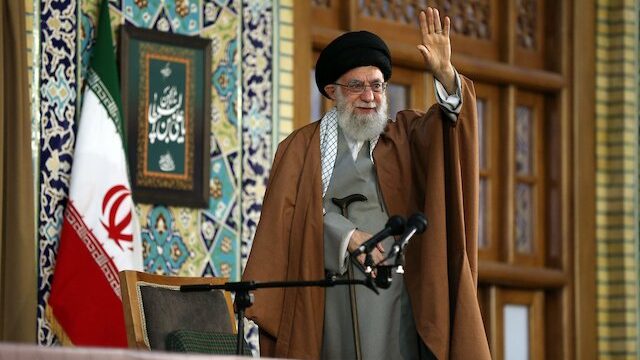 We will defeat the enemy, but this is not enough; economic deterrence is required

Khamenei.ir – On the first day of the 1398 Persian New Year, dubbed the year of “Boosting Production”, Ayatollah Khamenei—the Leader of the Islamic Revolution—visited the Shrine of Imam Reza (as) in Mashhad, wherein he delivered his annual speech to the pilgrims and residents of the area.

I believe the Year 1398 is, by God’s grace, the year of opportunities

After congratulating the Iranian nation as well as all nations that celebrate Nowruz, Ayatollah Khamenei addressed his audience by calling the new Persian Year as the year of opportunities. His Eminence asserted: Some have suggested that this year is a year of threats. I do not believe in that at all. I believe the Persian year 1398 is the year of opportunities, by God’s grace, the year of productivity and success.
The Supreme Leader described those inside the country who constantly talk negatively about the year ahead as influenced by the propaganda of the enemies and held: Of course those who suggest other views, and constantly threaten that unfavorable things will happen, are under the influence of the enemies’ propaganda, whether knowingly or unknowingly. The enemies of this nation, in addition to all other things they do, they also engage in a psychological warfare and spread propaganda. These propagandas must be known as they are. They had the same propaganda for the year 1397 aimed at trying to frighten people.

Referring to U.S. officials the Leader once named ‘First-rate Idiots’, Ayatollah Khamenei stressed that the United States has failed in their calculations against Iran, and said: One of those idiots said that if they withdrew from the JCPOA, the people of Iran would go on riots and the people would not be able to afford even bread. Another of these idiots suggested that U.S. officials would celebrate 2019 in Tehran.
Imam Khamenei pointed to the faulty analysis offered by the United States regarding Iran’s situation and elaborated on the reason behind these poor analyses by stating that: Is their analysis really so out of touch regarding the events in the region and the country? Are they seriously suggesting such analysis, which is only another sign of their idiocy? Or do they offer such analysis as part of their psychological warfare, so they are publicizing these words all over the world out of malice? I am not sure which the case is. It could be both idiocy and malice.

The Supreme Leader elaborated on the enemies of Iran’s efforts to stage economic and psychological wars against the Iranian nation by asserting that: Today the enemy is engaged in an economic war against us. Well the fact that the enemy is fighting against us is now recognized by all; the officials have understood that the enemy has initiated a war on us. Wars are not fought only by armaments; security and intellectual war is also a type of war, and can at times be more dangerous than a military war. This type of war can be seen in economic affairs. We must defeat the enemy in this war; and by God’s grace, we will defeat them.
His Eminence went on to mention that: But this is not enough. My request from the various actors in the country– government officials, academia, or in public sectors– is different. In addition to defeating the enemy, we should repel the enemy. Sometimes, you might defeat the enemy but the enemy might wait for another opportunity to strike a blow; this is useless.
He stressed that Iran needs to achieve a deterrence level where enemies cannot harm the country’s economy; he asserted: We must achieve a level where we repel the enemy, too. So the enemy sees they cannot harm us in the economy. Repelling is possible, just as has been the case with our military power. There was a time when the enemy bombarded our cities and we could not defend. Now that we have developed our equipment, the enemies in the region know that we can counter any enemy in the region by our precision-guided missiles.

Ayatollah Khamenei further slammed the Saudi regime for its despotic and dependent inclinations and held: I do not know any state in this region, or maybe anywhere in the world, worse than the Saudi regime. It is a despotic, dictatorial, corrupt, tyrannical and dependent regime. They provide such a regime with nuclear infrastructure. They announced that they would build a nuclear plant for it.
Ayatollah Khamenei declared that he does not worry about Saudi Arabia’s developing nuclear plants as he predicts the fall of the Saudi regime in the near future. His Eminence held: They announced they would build missile producing sections. There, it is okay to build them because that country is dependent on them, and it belongs to them! Now even if they build them, I would not worry, because I know in the near future they will be in the hands of Islamic warriors, God willing.
The Leader of the Islamic Revolution slammed Western coverage of the Christchurch terrorist attack for their double standards and Islamophobic motives and asked: Was not the recent incident in New Zealand—which entailed the massacre of Muslims—an incident of terrorist nature in their view? The Europeans, neither the politicians nor their media, would not call it a terrorist attack. They called it an armed attack instead. Whenever there is an action against someone supported by the West, terrorism and human rights are used to oppose it. But in this case – the attack in New Zealand- they would not call it a terrorist action. They are like this.

Europe has practically withdrawn from the JCPOA

Ayatollah Khamenei criticized the European partners of the JCPOA for having breached their commitments by not standing against the United States and held: What was the responsibility of Europeans in the matter of the JCPOA? An agreement was achieved between six countries and Iran. One party was the United States which has already withdrawn. What did the other signatories commit to do? Europeans should have stood up to the US, saying that they would adhere to their commitments. Their commitment was to remove all sanctions. They should have resisted strongly.
His Eminence stressed that Europeans made excuse to evade their commitments and even went as far as imposing new sanctions on Iran, adding that: However they did not resist on the pretext of numerous excuses. Not only they did not stand up to the US, they also practically withdrew from the JCPOA even though they had insisted that we should keep to it. That is, they even imposed new sanctions against Iran.
The Supreme Leader went on to say: When Europeans act in this manner, what can we expect them? What has recently been said about the new financial channel they created is more like a joke. This is a sad joke, a nonsensical joke. Their duty is totally different from what they are suggesting to do. In our most recent international affair, the Europeans betrayed us again. We cannot expect them [to act appropriately].