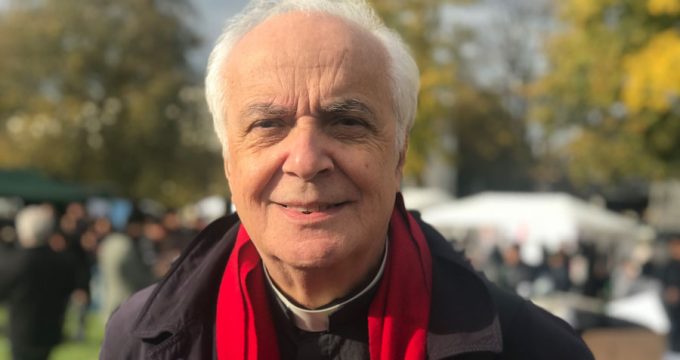 IRNA – British priest and intellectual Frank Julian Gelli said in an interview with the Islamic Republic News Agency (IRNA) that Imam Ali is an example of governance.

‘I wrote on Imam Ali when I was doing my MA in Islamic Studies,’ Reverend Gelli told IRNA in an interview on Tuesday.

Imam Ali (AS), a highly revered figure in Islamic history, is the first Shia Imam and the fourth caliph after Prophet Mohammad (AS). He was also the Prophet’s cousin and son-in-law as well.

Imam Ali’s birthday is named Father’s Day in Iran, which falls on March 20 this year.

‘Although was militarily a great warrior, he was politically skilled… Imam Ali was an extremely shrewd and wise leader of the Umma, especially during the time when he was the caliph.’

He said that because Imam Ali ‘actually acted extremely well in so many ways,’ he was ‘an example of governance not only of Islamic governance’ but in the widest sense.

Saying that there are many hadiths concerning justice and fairness with which he treated Jews and Christians as well as Muslims, he added that Imam Ali is also ‘the Lion of Islam’ which is something in common with Jesus Christ who is called ‘the Lion’ in the Book of Revelation of the Holy Bible.

Regarding Imam Ali’s piety, he said that some people divorce politics from piety, but Imam Ali is by no means so.

Commenting on Imam Ali’s son Imam Hussein’s Battle of Karbala, he said that it is moving to see that there was one Christian, or maybe more, that fought with Imam Hussein in Karbala because they realized ‘it was the battle of justice against tyranny’.

Reverend Gelli said that any person, with any religion, whether Islam, or Christianity or Judaism, is for justice and added that the justice in divine religions has a much deeper meaning than that of legal or even moral justice.

Referring to the unity of the religions in fighting forces of darkness and evil, Reverend Gelli added that many, e.g. former British Prime Minister Tony Blaire and former US President George W. Bush, tried to cause mayhem, ‘which caused so much harm in the Middle East’.

Regarding the New Zealand terror attack, he said that it was pure ‘atrocity’; many Muslims were ‘slaughtered’ while they were praying.

Saying that the western media are skeptical about the event, he said that one of people that survived the incident was an Afghan man.