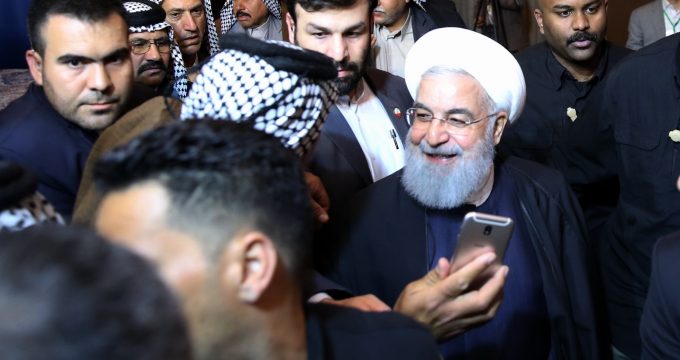 Al Monitor – President Hassan Rouhani became the first sitting Iranian president to meet with Grand Ayatollah Ali al-Sistani, the most senior Iraqi Shiite leader, when he visited the holy city of Najaf on March 14. The meeting took place on the final day of his three-day tour of Iraq. The historic meeting received widespread coverage by Iranian newspapers and was well received by both conservative and Reformist media.

Hard-line and conservative outlets alike hailed Rouhani’s cooperation with Iraq — which shares political, religious and cultural ties with Iran — rather than Europe or the United States. The hard-line Kayhan reported that Rouhani’s trip “had a clear message to those who sanction” Iran. The message, according to Kayhan, was that “no one is capable of economically blockading a powerful country like the Islamic Republic of Iran.” The headline: “America’s anger … with the president’s productive trip to Iraq.” It also compared President Donald Trump’s secret visit to Iraq, in which he did not meet with Iraqi officials, to Rouhani’s tour, in which he met with a broad range of Iraqi figures.

Reformist media outlets praised Rouhani’s ability to strengthen ties with a neighboring state. Etemad Daily covered the meeting above the fold, with a picture of Sistani facing Rouhani and Foreign Minister Mohammad Javad Zarif, with the headline in large print, “Meeting in Najaf.” Also at the meeting was Mahmoud Vaezi, the president’s chief of staff. The photos of the meeting and the president walking up the alleyway to meet Sistani quickly went viral on social media.