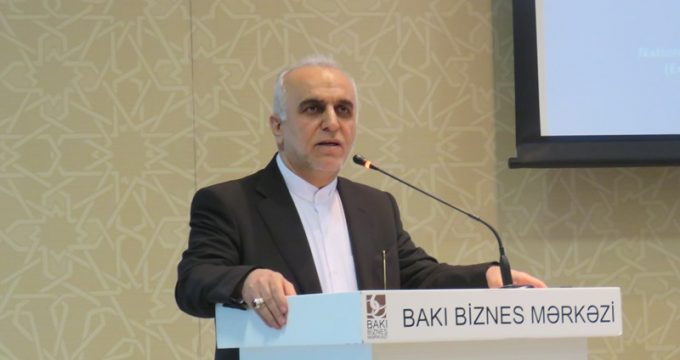 He made the remarks in trade and investment conference in Baku on Thursday.

The minister also called it efficient move in direction of strengthening economic ties.

He said establishment of joint venture companies in the fields of investment, services, tourism and international trade will deepen economic relations with win-win approaches for both countries.

He said that political relations level between the two states is excellent and added that the two presidents have visited 12 times in the past five years and more than 100 reciprocal visits took place between senior delegations of the two countries.

The two-day meeting kicked off on Thursday and is to wrap up on Friday in Baku.

The meeting is to consider mechanisms to expand cooperation between Iran and Azerbaijan Republic in the fields of investment, trade, banking and financial affairs, customs and border issues, communications, energy and environment, agriculture, food and health, tourism and culture in eight specialized committees.

Meetings with President Ilham Aliyev, prime minister, ministers of economic and agriculture, head of Railways, head of Customs Office, participating in joint economic conference and visits industrial town of Piralahi in suburb of Baku are among schedules of the Iranian minister two day visit in Baku.

Several cooperation documents are to be signed at the end of the meetings.

The 12th meeting of joint economic commission was held in Tehran on March 2018.