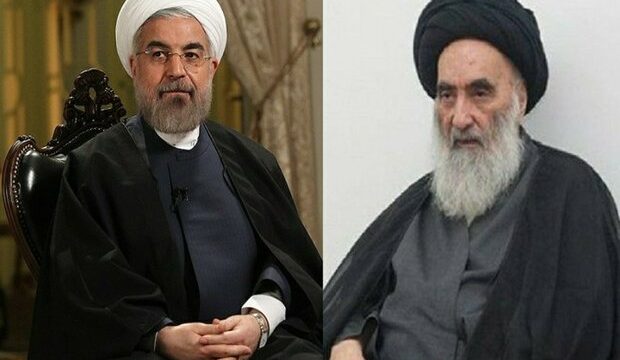 Heading a high-ranking delegation, including Foreign Minister Mohammad Javad Zarif and Ambassador to Iraq Iraj Masjedi, Rouhani is scheduled to hold separate meetings with other senior Shia clerics during his stay in Najaf.

Upon his arrival to the central Iraqi city this morning, Rouhani made pilgrimage to the holy shrine of Imam Ali (PBUH), the first Imam of Shia Muslims.

The Iranian president, who is on a three-day tour to Iraq, arrived in Baghdad on Monday and met with senior Iraqi officials and elites in the capital.

As part of his schedule, Rouhani visited the holy city of Karbala on Tuesday and held talks with the senior officials of Karbala and made pilgrimage to the shrine of Imam Hossein (PBUH), the third Imam of Shia Muslims.

The intensive talks, in the past two days culminated to signing of five documents of cooperation between Iran and Iraq.

The two sides on Tuesday released a joint statement on the framework of cooperation, including a bilateral free-visa plan and cleaning up the Arvand Rud River, known as Shat Al-Arab in Iraq. The river constitutes the shared border of Iran and Iraq on its southern end.