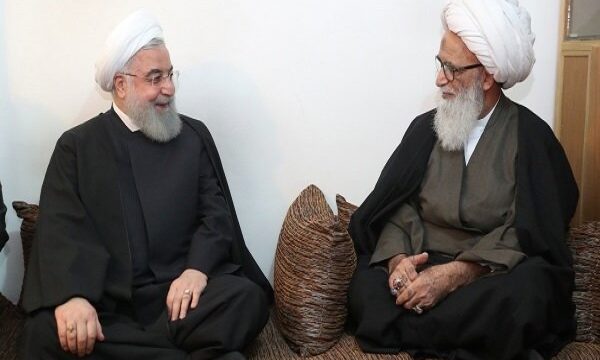 President in a meeting with Grand Ayatollah Basheer al-Najafi: ‘We’re willing to deepen Tehran-Baghdad ties in all fields’

MNA – President Rouhani met with Grand Ayatollah Basheer al-Najafi on Wednesday in Najaf City and talked with him in a cordial atmosphere.

In the meeting that was held in Grand Ayatollah Basheer al-Najafi’s house, Rouhani referred to his intensive meetings with Iraqi officials and said “we are willing to further develop Tehran-Baghdad relations in all fields.”

He also said that the two countries agreed to facilitate visa issuance for the citizens and tradespeople of both countries, and hence visa would be issued fee of charge.

“We also discussed topics of interest to both countries and reached agreements in different fields such as trade, health, rail transportation between Shalamcheh and Basra, as well as building industrial parks at the border of the two countries,” said Rouhani.

During the meeting, Grand Ayatollah Basheer al-Najafi stated that the formation of a real Islamic state in Iran is a great achievement in the world.

“The Islamic Republic of Iran’s work for real Muslims, especially Shias of the world, is a source of honor,” he said.

The Marja also said, “Iran is the voice of Shias and real Muslims,” wishing more success for the officials of the Islamic Republic of Iran.

Heading a large high-ranking political-economic delegation, President Rouhani arrived in Baghdad on Monday for a three-day state visit, which will end later today. Strengthening bilateral economic relations is announced to be atop agenda of the president’s trip.